While front-runner Moon Jae-in of the Democratic Party of Korea is trying to seal his lead at the polls, others are striving to turn the tables around. A conservative rival even claimed a “golden cross.”

Moon, who consistently topped polls with some 35-40 percent in support, is scheduled to visit the southern city of Busan -- Korea’s second-biggest and his stomping grounds -- and then Daegu before reaching his final destination, Gwanghwamun Square in the center of Seoul to wrap up his campaign there. 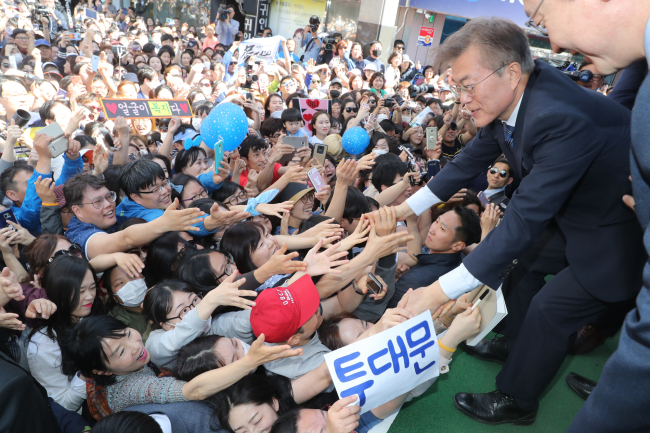 (Yonhap)
The liberal candidate pledged to designate Parents’ Day, celebrated May 8, as a national holiday and stressed his policies for seniors, including raising the monthly basic pension to 300,000 won ($264).

Moon’s camp also continued to deny accusations his son had received special treatment in the hiring process at the Korea Employment Information Service. As the People’s Party claimed to have a recording of a friend’s testimony as proof, Moon’s party urged them to “stop using fake news to bring (Moon) down.”

Ahn Cheol-soo, the candidate of the People’s Party, who was polling in second, and Hong Joon-pyo of the conservative Liberty Korea Party also sought to make strong last impressions on voters.

Ahn was to finish his five-day outdoor canvassing campaign, “Walking With Citizens,” Monday.

On Sunday, he rode subway trains and walked around major districts in Seoul.

With an aim of getting closer to the voters, the candidate had traveled -- often by foot -- through some of the nation’s largest cities, including Busan and Gwangju.

Live and online videos of his walking tour were viewed 1.4 million times via YouTube and Facebook as of Saturday afternoon, his camp said.

Ahn’s last destination Monday was set for Daejeon, where major technological institutes are located, the camp revealed. The region would well represent his pursuits for advanced technology and the nation’s balanced regional development, it said.

“Dear citizens, the new regime by the Liberty Korea Party is not going to be an extended version of (impeached) former President Park Geun-hye. It would govern for the people,” he wrote via Facebook on Sunday.

Citing a number of foreign media reports, he said he has the chance to turn the race tables and vowed to “establish a conservative administration on May 9,” in another post on the same day.

The hard-line conservative contender was to finish his campaign in Seoul Station on Monday, after touring Busan, Daegu, Daejeon and the Chungcheong provinces. He planned to canvas in front of Daehanmun of Deoksugung near City Hall in Seoul.

Two other major party-backed candidates, Sim Sang-jeung of the progressive Justice Party and Yoo Seong-min of the conservative splinter Bareun Party, were also set to finish their campaigns in Seoul on Monday.