SEJONG (Yonhap) -- The unemployment rate for the age group of 20s and 30s with no career experience hit a record high in the first quarter, due largely to a sluggish recruitment market and preference for hiring experienced workers, government data showed Saturday.

The tally on the unemployed aged 20-39 who have never had a job came to 95,000 in the January-March period, recording the highest level since the government began to track related data in 1999, according to Statistics Korea. 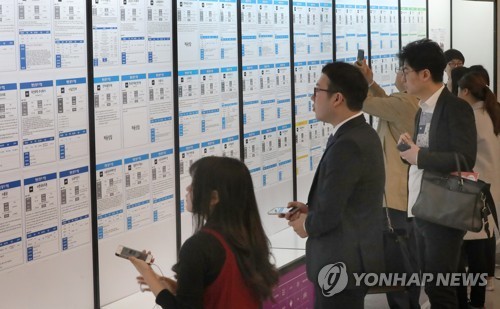 Job seekers at a job fair. (Yonhap)
The number accounts for as much as 82.6 percent of the total of 115,000 with no career experience at all, the data showed.

Although the first-quarter figure tends to be high given that companies usually start hiring fresh graduates mainly in March, the tally is alarming and calls for measures since it is on a rising trend, industry watchers said.

Even the tallies recorded during the two financial crises in 1998 and 2008 hovered below the first-quarter figure of 2017, the data showed.

The jobless rate among the 20-30 age group accounted for 14.5 percent of the total unemployment in the same age group, which stood at 653,000 as of end-March.

Industry watchers cited a growing preference by companies to hire experienced workers as a key factor that has led to such a grim tally, amid a highly competitive recruitment market.