The worst fine dust of 2017 blanketed much of South Korea on Saturday, as the authorities issued health warnings against the sandy, chemical-laden wind from China.

The National Institute of Environmental Research said fine dust warnings have been issued in 12 cities and counties nationwide as of 7:30 am Seoul and a few other regions have been placed under an advisory. 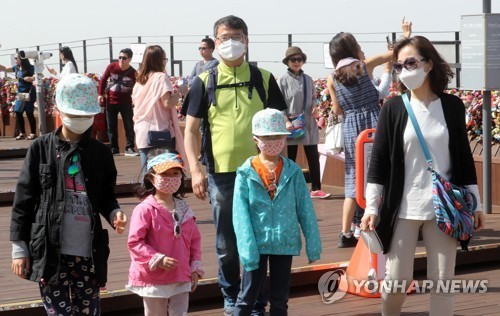 When these warnings or advisories are in place, people are advised to stay indoors or wear protective masks if they must venture outside

The Korea Meteorological Administration said dust particles are expected to remain on the peninsula through Sunday.

Originating from the deserts in southern Mongolia and northern China, the dusty air flew into the Korean Peninsula on a strong wind over the weekend

As of 9 am, Seoul’s atmospheric concentration levels of “particulate matter-10” pollutants reached 235 ㎍/㎥.

PM-10 refers to airborne particles 10 micrometers or less in diameter. Epidemiological evidence indicates that exposure to such pollutants causes cardiac and respiratory problems.

A study conducted from May 2015 to December 2016 showed last Thursday that 55 percent of the fine dust particles in the capital come from abroad, up from 49 percent in 2011.

Saturday is the second day of a three-day weekend, which began with Children’s Day on Friday. With poor air conditions apparently keeping many indoors, major highways were relatively empty in the morning hours, according to the Korea Expressway Corp. (Yonhap)