[ The Korea Herald – Send E-mail ]
[News Focus] Outlook improves for ‘undervalued’ Kospi
By Son Ji-hyoung
Published : May 5, 2017 - 18:02
Updated : May 5, 2017 - 21:01
The rosy outlook of the “undervalued” main bourse in South Korea is likely to continue for the time being, as robust economic fundamentals outweigh uncertainties, the main bourse operator said.

The forecast came after the benchmark Korea Composite Stock Price Index closed at an all-time high Thursday, after reaching 2,241.14, on the back of a buying spree by foreign investors. It broke the closing record of 2,228.96 set on May 2, 2011.

The record came in line with a series of earnings surprises from financial firms, electronic device makers, construction firms and equity firms in the last few weeks.

“The so-called ‘Korea Discount’ is narrowing down,” the Korea Exchange wrote in a release Thursday, referring to the historically lower valuations of Korean stocks compared to other nations due to internal and external uncertainties. 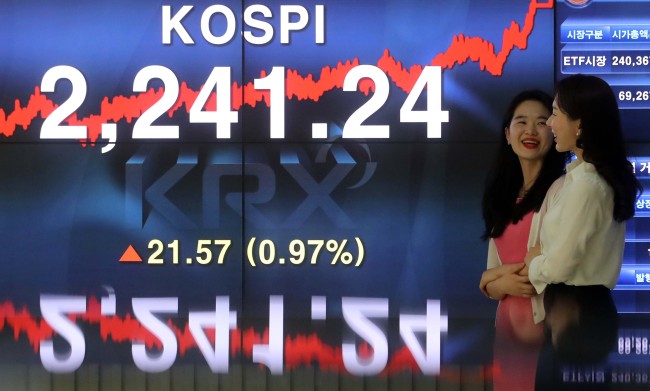 Latest signs indicate that the top-tier stock market has begun to lower its dependence on the sole stellar performance of market bellwether Samsung Electronics.

Starting from 2014, the operating profit volume of Kospi-listed firms excluding Samsung Electronics began to surge, according to data from the KRX and Korea Listed Companies Association. The figure, 66.4 trillion won ($58.4 billion) in 2014, rose to 75.8 trillion in 2015 and 92.1 trillion won in 2016.

The market rally also comes in light of strong macroeconomic readings this year. South Korea’s outbound shipments surged 24.2 percent in April on-year to $51 billion, showing on-year rises for six straight months from November, according to the Trade Ministry on Monday.

Moreover, internal uncertainties are likely to settle down, as the presidential election is drawing near, with liberal candidate Moon Jae-in, who led ex-president Park Geun-hye’s impeachment, atop pre-election polls.

“Coupled with brilliant performances in South Korean companies and positive macroeconomic readings, anticipation for the fresh policies by the new president is high,” said Park Hyung-joong of Daishin Securities.

“We are seeing a moment of the upward breakthrough, from prolonged undervaluation of stocks over six years,” said the release. 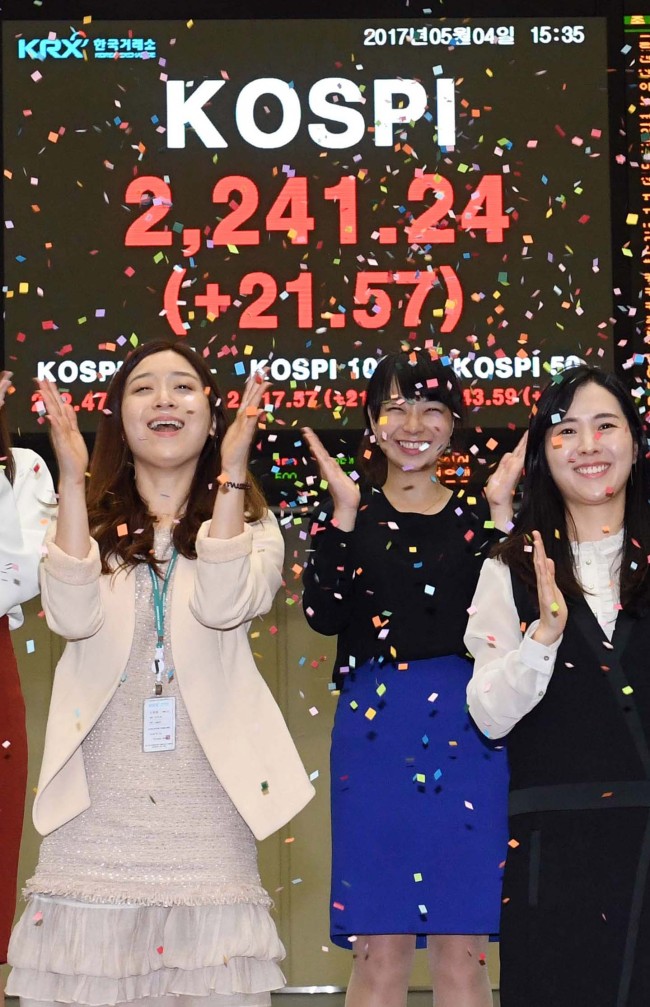 (Yonhap)
Analysts, however, gave mixed opinions on whether foreign investors’ appetite for Kospi stocks would continue. Foreign buying — 6.2 trillion won worth of shares from January to April, more than half of all buying in 2016 at 11.3 trillion won — has led  the recent rise in the Kospi.

“It was rich market liquidity and low key rates that have pushed the Kospi upward,” Lee said.

Another analyst, Seo Jung-hun at Samsung Securities, said in a report that the improved consumer sentiment would help extend the rally, regardless of foreign buyers’ appetite, citing the Composite Consumer Sentiment index that returned to positive region in six months. The CCSI came to 101.2 in April.

“The (recent) consumer confidence raises the expectation that the market liquidity from domestic demand may strengthen the buying trend in the stock market, which had heavily relied on foreign buying,” Seo wrote.

The stock market was closed Friday for a public holiday.