“The ICT Ministry has already completed the registration with the International Telecommunications Union so that the Mugunghwa-7 is successfully launched and operated,” said Choi Yeong-hae, an official from the Ministry of Science, ICT and Future Planning in charge of the project.

Korea Sat-7 is slated to be positioned at 116 degrees east on May 16 and to provide services in June after undergoing performance tests for a month. 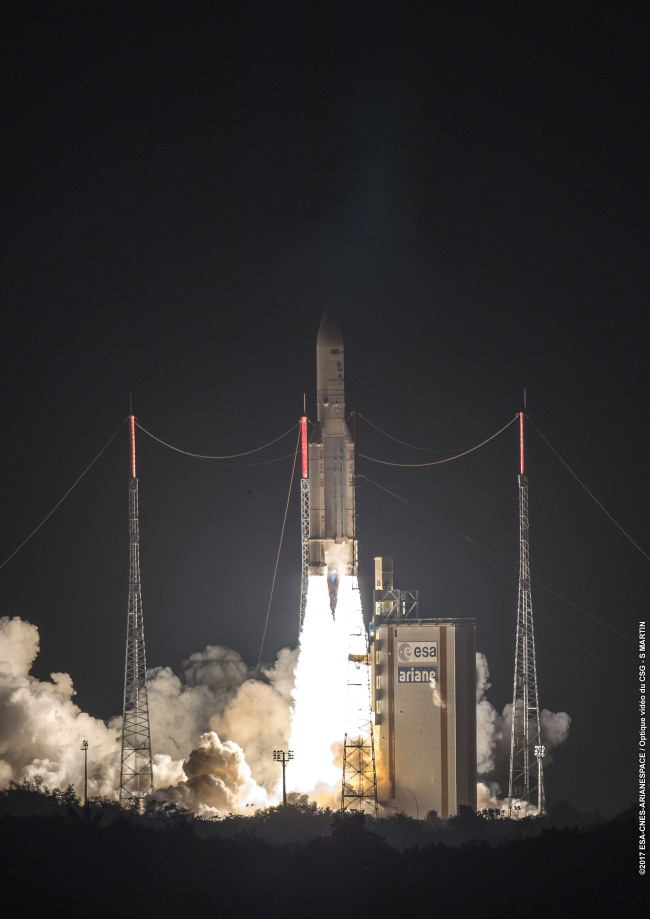 Korea’s fourth broadcasting and communications satellite Korea Sat-7 was successfully launched Friday. (KT SAT)
Designed for a lifetime of 15 years, Korea Sat-7 will encompass not only South Korea, but also a larger part of Asia, including the Philippines, Indonesia and India, the company said.

Franco-Italian aerospace manufacturer Thales Alenia Space was in charge of the design, production and testing of the satellite, while the Electronics and Telecommunications Research Institute of South Korea provided its navigation system.

It is the first time for the locally built satellite navigation system to be commercialized.

KT SAT plans to launch another satellite Korea Sat-5A in the third quarter to be positioned at 113 degrees east, with the aim of becoming a top 15 global satellite provider by 2020.

“With the successful launch, we are able to provide services in Indochina and Indonesia, which are growing markets. The Korea Sat-7 will be a starting point to make KT SAT become a global satellite provider,” said Han Won-sik, CEO of KT SAT.

Korea Sat-7 was supposed to be launched in March, but it was delayed several times because of general strikes in French Guiana. Local laborers went on strike in March, demanding pay increases, price stability, and improvements in health care and education from the French government. The monthlong strike ended as the French government pledged financial support.