US Sen. John McCain said Tuesday he can't understand why President Donald Trump said he would be "honored" to meet with North Korean leader Kim Jong-un, expressing concern that such a remark helps the "prestige" of the dictator.

Trump made the remark in an interview with Bloomberg News on Monday, arguing that he would "absolutely" be willing to meet with Kim if such a meeting takes place "under the right circumstances." 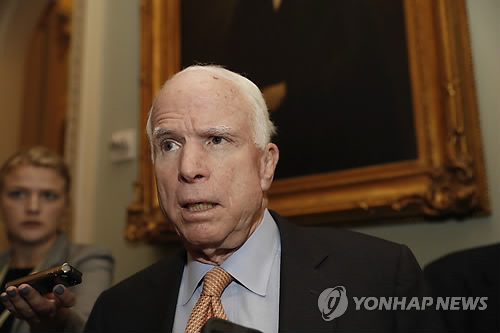 (Yonhap)
The use of the word "honored" raised eyebrows.

"I don't understand it and I don't think that the president appreciates the fact that when he says things like that it helps the credibility and the prestige of this really outrageous strongman," McCain, chairman of the Senate Armed Services Committee, said on MSNBC.

"The largest gulag left on earth is in North Korea. And we all know about their human rights abuses and others," he said.

The "honored" remark came after Trump made a series of positive comments on the North's leader.

In media interviews last week, Trump praised Kim, and even called him a "pretty smart cookie," for taking over power from his father at a young age while dealing with "very tough people" trying to take power away from him, including his uncle, whom Kim executed.

McCain said that US Republicans have always stood up for human rights and against dictatorships.

"This is a dramatic departure from the kind of approach to foreign policy and human rights that I admired Ronald Reagan so much for. And I think one of the reasons why he was one of the most successful presidents in history," he said. "it's very disturbing. It's disturbing because we are proud Republicans and we stand for human rights."

"I wish that the president would consider much more carefully his comments, particularly in praise of a North Korean. He's worse than a dictator. He's a despot. He's a -- I've run out of adjectives and adverbs," McCain said.

"And this guy in the Philippines has praised extrajudicial killings of people, I've read 7,000 have been killed. You can't praise that kind of behavior and not raise concerns around the world," he said.

Rep. Ed Royce (R-CA), chairman of the House Foreign Affairs Committee, said that the "right circumstances" for Trump's talks with the North's leader should be for the regime to "stop its atomic weapons program and for North Korea to change its policies in terms of its treatment of its people."

"If Kim Jong-un changes his policies and allows political prisoners to be released and stopped his nuclear weapons program, I think we’re in concurrence that we would be able to have these discussions," Royce told reporters after receiving a medal from South Korea's government for his contributions to the Korea-US alliance.

"Obviously, now is not the time. Now is not the time for those discussions because right now is the time to work with Beijing and the rest of the international community in order to put pressure on North Korea to stop its nuclear weapons program," he said. (Yonhap)