South Korea's state-funded corporations saw their debt ratio decline for four years in a row last year on the back of government-led efforts to improve their balance sheets, the finance ministry said Monday.

The debt ratio of 329 public firms reached 167 percent as of end-2016, down 16 percentage points from a year earlier, with their combined credit totaling 499.4 trillion won ($437.9 billion), according to the Ministry of Strategy and Finance. 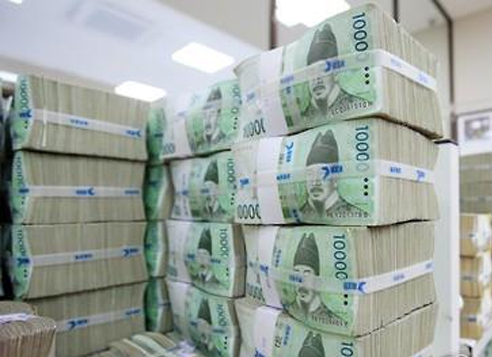 Their combined debt accounted for a six-year low of 30 percent of the country's gross domestic product last year, down from 32 percent in the previous year.

They posted 16.1 trillion won in net profit last year, up 3.6 trillion won from a year earlier, thanks to low fuel and borrowing costs.

The total assets of the public organizations amounted to 798.7 trillion won, with their equity capital totaling 299.4 trillion won.

The South Korean government has put its policy priority on reducing the debts of state-funded businesses and improving their financial health as some energy-developing public firms have been suffering from massive losses following an overseas resources development boom at a time of higher oil prices.

The Korea Gas Corp. posted its debt-to-equity ratio at 325 percent last year, up from 321 percent a year earlier, while the debt ratio of the Korean National Oil Corp. rose to 529 percent in 2016 from 453 percent. (Yonhap)