[ The Korea Herald – Send E-mail ]
Govt. moving to check Trump's statement to scrap Seoul-Washington FTA
By a2016032
Published : Apr 28, 2017 - 15:33
Updated : Apr 28, 2017 - 17:29
The South Korean government is trying to figure out the exact meaning of US President Donald Trump's statement that he will fix or scrap a bilateral free trade deal between the two countries, officials here said Friday.

In an interview with Reuters, Trump called the South Korea-US free trade agreement "horrible," saying, "We are going to renegotiate that deal or terminate it." 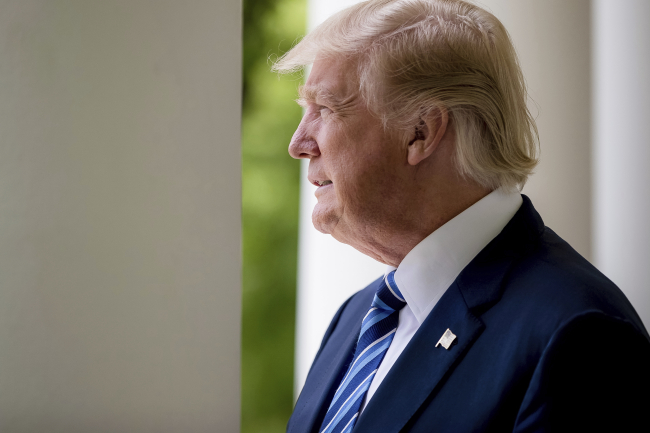 (Yonhap)
His comments came days after Vice President Mike Pence said earlier that Washington will review and reform the two-way pact with South Korea, citing "too many barriers" to US businesses.

It is the first time that the US president directly mentioned his plan to terminate the deal.

The Ministry of Trade, Industry and Energy is making all-out efforts to find out the background and the intention of the statement, as the South Korean government has never received any official requests to reopen negotiations or a notice of the FTA being scrapped.

"We are trying to understand what President Trump said exactly and the context of his remark," a ministry official stressed.

The US leader has in the past blamed the Korea-US FTA for causing a trade deficit of $28 billion between the two countries last year.

Earlier, the Washington government released a trade report about the positives of the Korea-US FTA and did not put South Korea on the list of currency manipulators, giving signs that it will put policy priority on dealing with rising geopolitical issues over North Korean nuclear ambitions.

Following Vice President Pence's comments on "reforming" the FTA, the South Korean government has tried to dismiss the possibilities of renegotiations, saying that the US did not take action immediately.

The ministry, nevertheless, has been looking into the FTA issue for some time and it was not totally unprepared for Trump's strong remark on possibly scrapping the deal, which can take effect 180 days after one party unilaterally informs the other party of its intention.

"We've been preparing for all kinds of scenarios. We will keep close tabs on the US movements and map out appropriate countermeasures," said the official. (Yonhap)