[ The Korea Herald – Send E-mail ]
Trump says he wants Korea to pay cost for $1b THAAD deployment: report
By a2016032
Published : Apr 28, 2017 - 11:24
Updated : Apr 28, 2017 - 16:11
US President Donald Trump said he wants South Korea to pay for the $1 billion deployment of the US Terminal High Altitude Area Defense battery, a missile defense system the allies are currently fielding here, he said in an interview with Reuters reported on Friday.

Trump also said he will "renegotiate or terminate" the US free trade agreement with South Korea.

Trump's remarks were reported after key elements of THAAD, the high-profile X-band radar and mobile launchers, were delivered to the host site in the southern Seongju county on Wednesday as the deployment gathered pace. 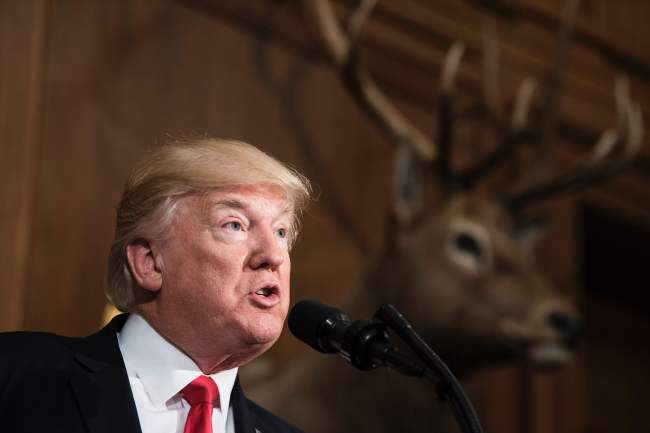 US President Donald Trump (Yonhap)
The deployment is a major topic of discussion for the ongoing presidential race here, with front-runner Moon Jae-in pledging to review the installation if he wins the presidency.

"I informed South Korea it would be appropriate if they paid.

It's a billion-dollar system," Reuters quoted Trump as saying.

According to the interview, Trump questioned why the US was paying for the THAAD system to defend against a potential missile attack from North Korea.

South Korea's Ministry of National Defense, however, said there is no change in the two countries' official position that the US funds the deployment while the South provides the land. A diplomatic official here also said the government has not been "informed" of the cost issue.

"The official position remains unchanged that our government provides the land and other infrastructure while the US covers the burden of cost of deploying and maintaining the THAAD system according to the regulations of the Status of Forces Agreement," the ministry said in a brief press release shortly after the report.

Ever since their first announcement of the deployment plan on Feb. 7 last year, the ministry and US Forces Korea have said the deployment will be carried out under the SOFA.

South Korea is currently sharing the cost of maintaining 28,500 US troops stationed in South Korea by renewing the bilateral Special Measure Agreement every five years.

Under the latest SMA signed in early 2014, South Korea is contributing nearly 1 trillion won ($879 million) every year. The allies are expected to initiate their negotiations late this year or early next year to renew the agreement which will expire at the end of 2018.

"It is unacceptable, it is a horrible deal made by Hillary," Trump said, putting the blame on his former presidential rival Hillary Clinton. "It's a horrible deal, and we are going to renegotiate that deal or terminate it."

Asked when he would announce the renegotiation, he said, "Very soon. I'm announcing it now."

The president warned that a major conflict could take place over North Korea's nuclear and missile programs, but ensured that he wants to handle the situation peacefully.

"There is a chance that we could end up having a major, major conflict with North Korea ... We'd love to solve things diplomatically but it's very difficult," Reuters quoted Trump as saying. He cited the North Korean issue as the biggest global worry now.

Speaking of North Korean leader Kim Jong-un, Trump said, "He's 27 years old. His father dies, took over a regime. So, say what you want but that is not easy, especially at that age ... I'm just saying that's a very hard thing to do."

Trump, asked if he considered North Korean leader Kim Jong-un to be rational, said he was operating from the assumption that he is rational, Reuters reported. (Yonhap)