The country's top court on Thursday dismissed a former Navy chief's appeal to a sentence of four years in prison for taking kickbacks from defense contractors. 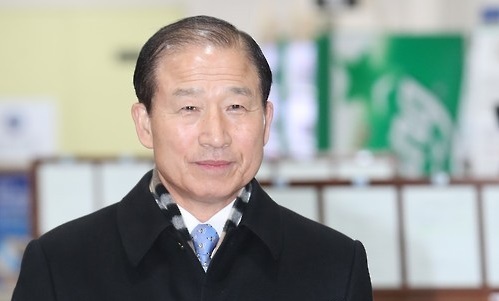 Jung Ok-keun, chief of Naval Operations from 2008 to 2010, arrives at the Seoul Central District Court in the capital to stand trial over bribery allegations. (Yonhap)
Ending a two-year legal battle, the Supreme Court confirmed his conviction of third-party bribery.

A lower court sentenced him to 10 years in prison for bribery and an appeals court reduced it to four years. The highest court in June last year ordered a retrial saying that Jung did not directly receive the money.

The prosecution changed his charge to third-party bribery, which applies to a person who exerts influence to help a third person or entity take bribes. In February, he received four years in prison on that charge. He raised an objection, which the top court dismissed.

The court also confirmed the lower court's ruling of a suspended two-year term for his son named as accomplice in the crime. (Yonhap)