WASHINGTON -- A US THAAD missile defense battery being installed in South Korea will become operational "in the coming days," the US Pacific commander said Wednesday.

Adm. Harry Harris, commander of the US Pacific Command, made the remark during a House Armed Services Committee hearing after the US military brought the radar and other equipment to the deployment site in southeastern South Korea earlier in the day. 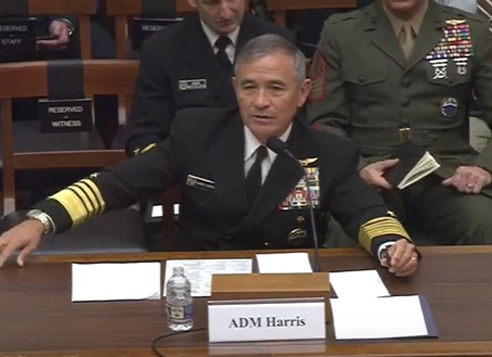 Seoul and Washington decided to place a THAAD unit in the South to bolster defenses against growing nuclear and missile threats from the North after Pyongyang carried out its fourth nuclear test in January 2016 and a long-range rocket launch the following month.

China has vehemently protested the decision, claiming the system, especially its powerful radar, could be used against the country, despite repeated assurances from Washington and Seoul that it is a defensive system designed only to counter North Korean threats.

Beijing has taken a series of economic retaliatory measures against South Korean firms.

"I find it preposterous that China would try to influence South Korea to not get a weapon's system that's completely defensive against the very country that's allied with China," Harris said.

"Defending our homeland is my top priority. So I must assume that Kim Jong-un's nuclear claims are true. I know his aspirations certainly are. And that should provide all of us a sense of urgency to ensure PACOM and US Forces Korea are prepared to fight tonight with the best technology on the planet," he said. "That's why Gen. Brooks and I are doing everything possible to defend American homeland and our allies in the Republic of Korea and Japan."

Gen. Vincent Books is commander of US Forces Korea.

Harris said that all options are on the table in dealing with the North. Still, he said, the US goal is to bring the North's leader to "his senses, not to his knees."

Pressed for preemptive strike options, the commander said the US has "a lot of pre-emptive options" against the North, but declined to elaborate in an open hearing.

Harris also called for putting missile interceptors in Hawaii in addition to those in Alaska and California.

"The interceptors that we have the defend our homeland directly in Alaska and California are critical. I have suggested that we consider putting interceptors in Hawaii that defend Hawaii directly and that we look at the defensive Hawaii radar to improve Hawaii's capability," he said.

Asked what the North could do militarily against US assets in the region or allies, Harris said anything could be possible, including previous types of provocations, such as the 2010 sinking of the South Korean warship Cheonan and the artillery attack on the island of Yeonpyeong.

Harris apologized for the confusion over the whereabouts of the Navy strike group led by the aircraft carrier Carl Vinson that had been reported to be heading to waters off the Korean Peninsula to deter the North when it was actually moving in the opposite direction.

"That's my fault on the confusion and I'll take the hit for it. I made the decision to pull the Carl Vinson out of Singapore, truncate the exercise that it was going to do south of Singapore, cancel the support visit to Australia and then proceed north," he said.

"Where I failed was to communicate that adequately to the press and the media. That is all on me but we've done exactly that. We pulled out of Singapore, truncated the exercise, cancelled the port visit and then moved it north. Today, it sits in the Philippines Sea just east of Okinawa in striking range and power projection range of North Korea if called upon to do that."

Earlier this month, US President Donald Trump said he sent an "armada" to Korea. Defense Secretary Jim Mattis said the strike group was heading to the Western Pacific after calling off previously planned exercises with Australia. National Security Adviser H.R. McMaster also said it was a "prudent" decision to send the ships to deter the North.

But Navy photos later showed that the group of ships was actually about 3,500 miles away from the Korean Peninsula and heading in the opposite direction to participate in joint exercises with Australia before heading off to the Korean Peninsula. (Yonhap)