South Korea, led by head coach Shin Tae-yong, were schooled by Jeonbuk Hyundai Motors in their tune-up match for the 2017 FIFA U-20 World Cup at Jeonju World Cup Stadium in Jeonju, North Jeolla Province. The country will host the U-20 World Cup from May 20 to June 11 in six cities. 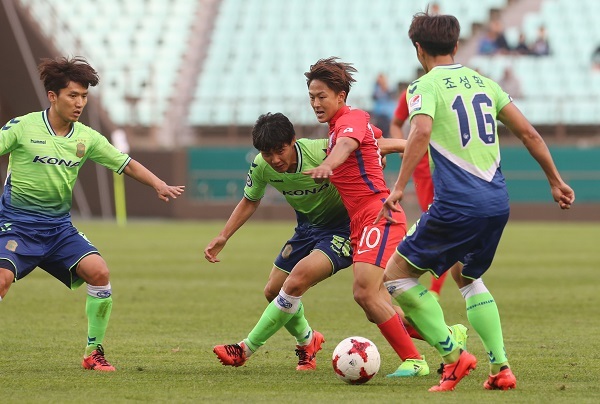 This was the final tune-up friendly before Shin confirms his 21-man entry for the U-20 World Cup. The head coach previously said he will cut at least four players from his 25-man provisional squad after playing friendlies with local football clubs this month. He is expected to announce the final squad on Saturday or Sunday.

Before meeting Jeonbuk, the U-20 side played to a scoreless draw against Myongji University on April 14 and fell to second-tier pro club Suwon FC 3-2 five days later. They beat Jeonju University 1-0 on Monday.

The U-20 side couldn't handle the experienced Jeonbuk players from the start. Although they are in the middle of the season, the four-time K League champions deployed their regular members against the young Taeguk Warriors and easily dominated them.

South Korea gave up their first goal to Kim Min-jae, who headed down Jeong Hyuk's corner kick in the ninth minute. Two minutes later, Go Moo-yul punished Shin's side from close range after receiving a pass from Edu.

Lee Dong-gook, the all-time leading scorer in the K League, came on to the pitch in the second half and scored Jeonbuk's third goal.

The 37-year-old striker tabbed home Eder's cross in the 51st.

The Korea Football Association said the match was designed to raise the competitiveness of the U-20 team and help the players get used to the pitch conditions of Jeonju World Cup Stadium, where South Korea will play its first two matches at the U-20 World Cup.

South Korea are paired with Argentina, England and Guinea in Group A at the 24-team FIFA tournament. They will kick-off the tournament on May 20 against Guinea at Jeonju World Cup Stadium before taking on Argentina at the same venue three days later.

Their last group match against England will be played at Suwon World Cup in Suwon, Gyeonggi Province. (Yonhap)