[ The Korea Herald – Send E-mail ]
[Election 2017] How will presidential candidates raise taxes?
By Korea Herald
Published : Apr 26, 2017 - 15:01
Updated : Apr 26, 2017 - 17:10
The following is the third in a series of articles breaking down the presidential candidates’ major economic pledges in a simulated question-and-answer format by gathering their answers from official websites, media interviews, public speeches, books and more. The third installment delves into their proposals on increasing taxes and enhancing welfare. -- Ed.


South Korea’s tax code is likely to reach a turning point upon the May 9 presidential election, as the majority of the presidential candidates pledge to collect more taxes from conglomerates and high-income earners to finance welfare programs and improve income distribution.

Except for Hong Joon-pyo of the conservative Liberty Korea Party, all of the main candidates -- front-runner Moon Jae-in of the liberal Democratic Party of Korea, Moon’s strongest rival Ahn Cheol-soo of the centrist People’s Party, Yoo Seong-min of the splinter conservative Bareun Party and Sim Sang-jeung of the minor progressive Justice Party -- promise to raise, or consider raising, corporate and income taxes. 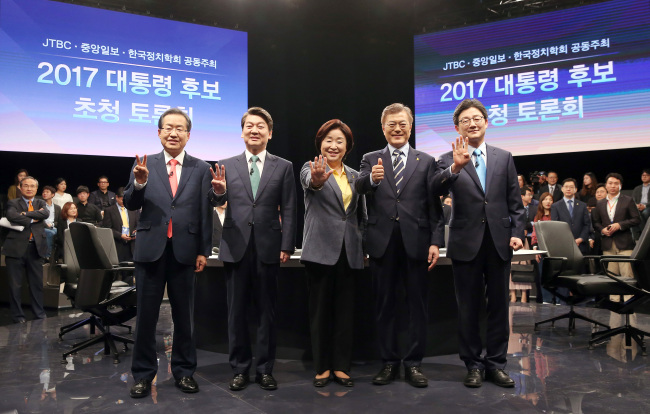 (Yonhap)
However, they differ on the scope of the tax hikes, on which steps the government should take, as well as on how they will use the increased tax revenues.

In a synthesized question-and-answer format, The Korea Herald introduces how the major candidates promise to raise taxes and enhance welfare for the seniors and children.

Q: What kind of tax hikes do you seek and which welfare areas do you plan to spend more on? 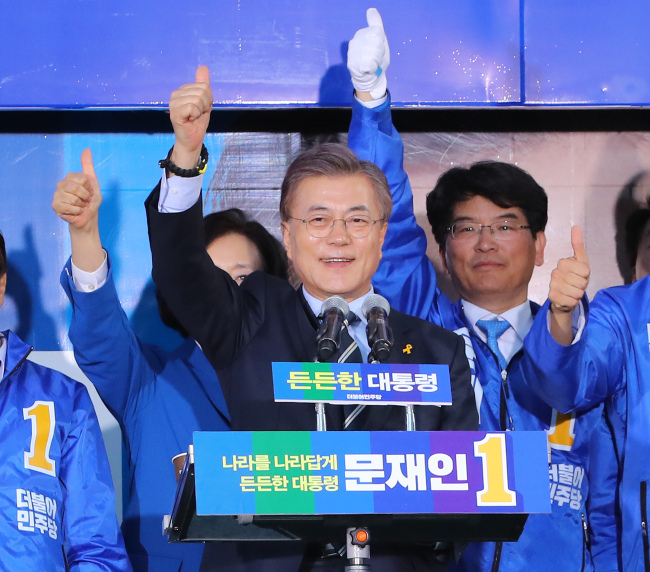 (Yonhap)
As the first step, I will enhance taxation on high-income earners to secure more tax income. If the government needs more tax income, then we will have to reduce tax benefits currently available to major conglomerates for various investments such as research and technology development. If the government is still short of tax revenue, then I will seek agreement from the public to raise the corporate tax rate to 25 percent for companies earning more than 50 billion won ($44.5 million) taxable income per year, as a last resort. (From a JTBC TV debate Tuesday)

As Korean society is quickly aging, the government should spend more on seniors. I will allocate more funds for basic pensions to give a monthly allowance of 300,000 won to those aged over 64 in the lower 70 percent of the income bracket. For child care and education, the government will fully cover the budget for Nuri Curriculum, a free preschool program for children aged 3 to 5, and introduce a new child benefit for children aged up to 5 to give them 100,000 won per month and increase the amount in multiple phase. (From his 10 pledges submitted to the National Election Commission) 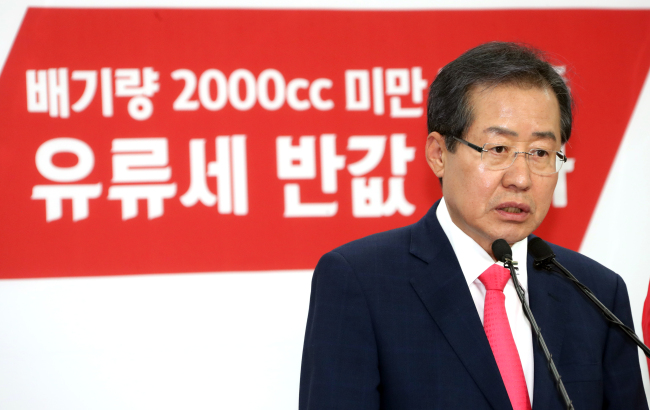 (Yonhap)
I oppose any tax increase. Rather, I will seek to cut oil taxes by half for every car with engine displacement of less than 2,000 cubic centimeters. Even when global oil prices go down, the oil tax burden still heavily weighs on Korean people because the oil tax is fixed. It is very unfair to impose excessive tax on oil because it is not a luxury item but a daily necessity. (At a press conference at the National Assembly on Tuesday)

On corporate tax, I believe Korea should cut corporate tax further. In particular, companies that hire many regular workers should pay less in corporate tax. The government also has to give tax incentives for those investing in research and development. That way, we can spur investment and create more jobs.

If elected, I promise to cut consumption tax on cigarettes. We cannot fill up our national coffers by taking money from ordinary people. (At an SBS TV debate on April 13)

For the welfare of children, I will seek to pay a monthly child benefit of 150,000 won for elementary, middle school and high school students whose households are in the lower 50 percent income bracket. I will also double the government subsidies for parents who care for children aged up to 6 at home. For seniors, I will raise the basic pension fund payment to 300,000 won per month for those aged over 65 in the lower 70 percent of the income bracket. (From his 10 pledges submitted to the National Election Commission) 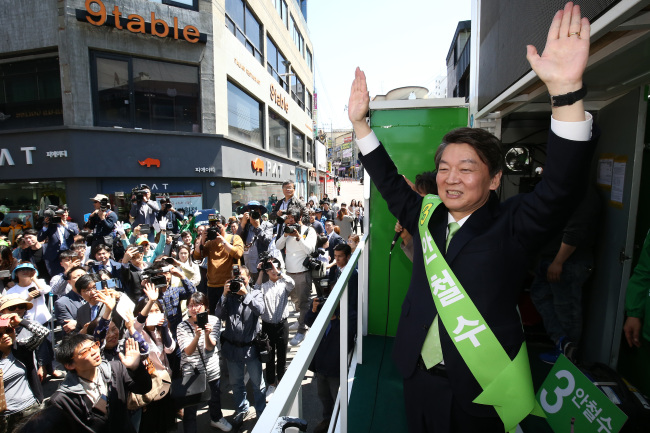 (Yonhap)
Increasing any tax should come at the last stage. Prior to a tax raise, the government should first streamline its spending strategies to make spending more effective. The second step should be applying a progressive tax system (in the corporate sector). Currently, Korea’s conglomerates benefit from a “reverse-progressive” tax system. This should be corrected first. The effective corporate tax rate on companies whose annual net profits surpass 500 billion won is actually lower than those earning less. (Said during a JTBC TV debate Tuesday)

As for income tax, taxation on capital gains such as profits from financial and real estate investment should come first. Then, I will review raising the highest income tax rate for high income earners. I will also seek to raise real estate holdings tax but cut real estate transaction tax. (From his official website)

To increase the birthrate, I will introduce 30 days of paid paternal leave at the time of childbirth, instead of the current five-day leave. I will increase the number of state-run day care centers affiliated with elementary schools. For seniors, I will reduce the burden of medical costs for dentures and dental implants. I will make sure the government builds a system that ensures seniors earn income after retirement. (From his 10 pledges submitted to the National Election Commission) 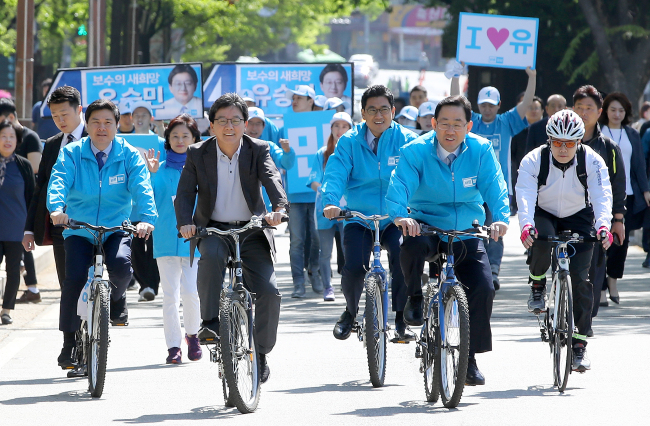 (Yonhap)
I take a more aggressive approach in raising taxes than Moon or Ahn. In terms of corporate tax rates, I basically believe we have to raise it back to the level of 25 percent, which was cut to 22 percent in the former Lee Myung-bak administration. I will also enhance the progressive income tax rate and impose a higher tax rate on high-income earners. If necessary, we could review raising value-added tax as well, but we need be extra careful on that. (At a KBS TV debate April 19)

Korea’s overall tax burden ratio, or the proportion of the total tax income out of the gross domestic product, is 19 percent, while the average tax burden among the 35 Organization for Economic Cooperation and Development members is about 26 percent. It is almost impossible to make a strong social safety net without enough state funds. So, we have to increase Korea’s tax burden ratio to around 22 percent. (From comments of Ha Hyun-chul, chief counsel of policy committee of the Bareun Party on behalf of Yoo at a debate on taxation hosted by the Korean Association of Tax and Accounting and Korean Taxpayers Association in Seoul, on April 19)

I will seek a gradual increase in the payment of pensions for those aged over 65 in the lower 50 percent income bracket, double the government subsidies for parents who care for children aged up to 35 months at home and monthly pay a 100,000 won benefit per child for students from elementary to high school.

I will raise the maximum monthly payment for parental leave for child care from the current 1 million won to 2 million won as well. (From his 10 pledges submitted to the National Election Commission) 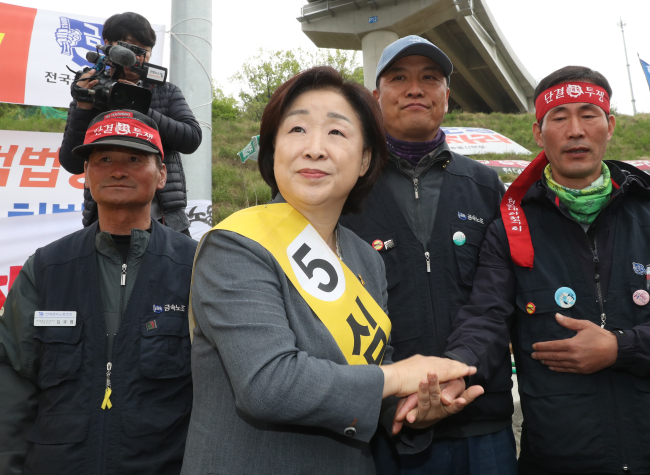 (Yonhap)
If elected, I will introduce a new social welfare tax to cover the finance of welfare. This will be a surtax, which will be a 10-20 percent additional tax on income tax, corporate tax, inheritance tax and comprehensive real estate tax. With the social welfare tax, I will be able to secure a total of 109 trillion won in tax revenue during my five-year term.

I will also raise the maximum corporate tax rate to 25 percent, which is the pre-Lee Myung-bak administration level. I will also impose a 10 percent tax on companies’ interest income, dividend income and income from the disposal of stocks to boost employment and facility investment.

I will also seek to raise the minimum corporate tax rates, set at 10, 12 and 17 percent depending on the size of taxable income, to 10, 15 and 20 percent, to collect more taxes from bigger companies.

As for income tax, I will apply the highest income tax rate of 45 percent, instead of the current 40 percent, to those earning more than 150 million won annual income.

For the welfare of seniors, I will pay every person aged over 65 a basic monthly pension of 300,000 won. I will make our National Health Insurance cover 90 percent of the expenses for hospitalization of adults and 100 percent for children aged under 15. (From her compilation of pledges on her official website)