Former Olympic swimming champion Park Tae-hwan will make his season debut in the United States next month, officials said Friday, as he's gearing up for his first world championships in six years.

His agency, Team GMP, said Park has signed up for the 100m, 200m, 400m and 1,500m freestyle races at Arena Pro Swim Series in Atlanta from May 4 to 7. It will also double as the national team trials for July's world championships for Park. 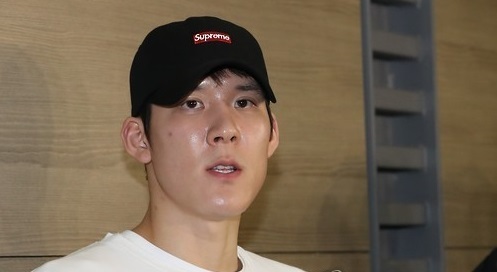 South Korean swimmer Park Tae-hwan speaks to reporters at Incheon International Airport before departing for Australia for training. (Yonhap)
Park, the 2008 Olympic 400m freestyle gold medalist, is trying to redeem himself after getting shut out of medals at the 2016 Rio de Janeiro Olympics. He'd earlier served an 18-month doping ban.

Park bounced back from the disastrous Olympics to win a few international meets later in the year. He's hoping to win his fourth world championships medal in Hungary this July, after winning a gold and a bronze in 2007 and a gold in 2011. The 2011 competition was also Park's most recent world championships.

Park has been training in Australia since February, but his competition schedules have been thrown out of whack a little because the Korea Swimming Federation couldn't settle on dates for the national team trials on time.

The KSF has been under the direct management of the Korean Sport and Olympic Committee since March 2016 on the heels of a corruption scandal, and its administrative operations have been in shambles.

Park had earlier planned to enter the New South Wales State Open Championships in early March, so he could start building up for the national team trials, which have been typically held in April.

The KSF, though, only finalized its competition schedule on March 24, saying the national team trials will be held from May 12-15.

The KSF has also announced it will recognize times posted in overseas competitions between May 7 and 15, and use them to assemble the national team if swimmers are unable to enter the trials.

After the competition in Atlanta, Park will return to Australia to resume his training and later set up camp in Europe. (Yonhap)