MONACO -- Top-ranked Andy Murray returned from an elbow injury to beat Gilles Muller of Luxembourg 7-5, 7-5 in the second round of the Monte Carlo Masters on Wednesday.

“Missing Miami was a shame because it’s one of my favorite ones, but I needed it,” Murray said. “Sometimes having a break, if you’re feeling tired or fatigued is great. But when you’re playing really well and winning, you don’t think so much about fatigue.”

Murray looked a bit sluggish early on against Muller, dropping serve in the opening game. He saved two set points in the ninth but then broke and held to love to move 6-5 up.

“The first service game was obviously not ideal, but when you are coming back from not serving for a few weeks that‘s normal,” Murray said. “My elbow’s always a bit sore, that‘s nothing to do with this week or the last two years.” 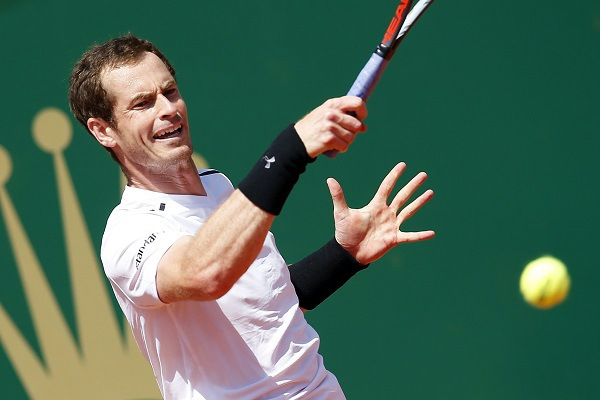 Andy Murray of Britain returns the ball to Gilles Muller of Luxembourg during their second round match at the Monte-Carlo Rolex Masters tournament in Roquebrune Cap Martin, France, 19 April 2017. (EPA-Yonhap)
Murray’s enforced absence at least gave him the added bonus of spending more time with his wife and young daughter.

“Sometimes it’s tricky for the tennis players because of how much we travel and the schedule can be difficult,” he said. “I’ve spent a lot of time with my family, which I‘ve enjoyed ... and which hopefully they have as well.”

The upbeat Murray continued his subtle humor when jokingly comparing the picturesque views at the Monte Carlo country club, where the center court is perched over the glittering Mediterranean sea, with his native Scotland.

“In Scotland you’d have great views but the weather‘s so bad, so it’s not as enjoyable,” he said.

Murray took the first set on Muller’s serve when, having done well to retrieve two drop shots from his opponent, Muller missed an easy smash at the net. He whacked his racket against his shoe in frustration and then smashed it on the ground, buckling it in half.

Murray dropped serve again in the opening game of the second set but broke straight back. He set up a match point with an excellent backhand cross-court winner as he retrieved a shot deep into the court, and clinched victory on his first opportunity when Muller hit a forehand wide.

“It just shows what a great player he was and still is,” Berdych said. “Even at this late stage in his career he‘s still able to play like that.”

Later, defending champion Rafael Nadal was facing Britain‘s Kyle Edmund. This is one of Nadal’s favorite tournaments and he was won it nine times.

The Spaniard is looking for this first title of the year after losing in three finals -- to longtime rival Roger Federer at the Australian Open and the Miami Open, and a surprise defeat to big-serving American Sam Querrey in Acapulco, Mexcio.

Nadal will not be able to get his revenge on Federer here, since the 18-time Grand Slam champion is skipping the tournament. Federer is playing very little -- if at all -- on clay before he begins his bid for another Wimbledon title on his favored grass surface this summer. (AP)