Organizers of the 2018 PyeongChang Winter Games said Tuesday their Olympic test events over the past 14 months have mostly been a success, though there's still room for improvement before the real competition. 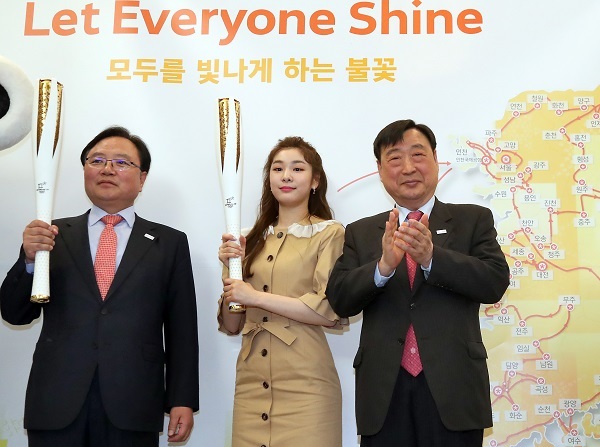 Kim Yu-na, former Olympic figure skating champion and honorary ambassador for the 2018 PyeongChang Winter Olympics, poses with the Olympic torch, flanked by Soohorang (left), the PyeongChang 2018 mascot, and Lee Hee-beom, head of PyeongChang's organizing committee, in Seoul on April 17, 2017. (Yonhap)
At a press conference held at Gangneung Hockey Centre in Gangneung, east of PyeongChang, Yeo Hyung-koo, secretary-general of the PyeongChang 2018 organizing committee, said the series of test events has been a major boost to his team's collective confidence.

"Our confidence is such that we believe we can open the Olympics right away," Yeo said. "Now that we've all witnessed the possibilities of having a successful Olympics, we hope more and more people will take interest in the PyeongChang Olympics."

According to the organizing committee's data, nearly 3,000 athletes and 2,600 officials from 45 nations took part in the 25 test events, and PyeongChang had a little over 9,000 people working on those competitions, along with 2,380 volunteers.

Together, the 25 competitions attracted nearly 195,000 spectators.

The organizing committee noted that the International Olympic Committee, international winter sports federations and participating athletes all reserved high praise for the venues. It also said the test events also helped create a buzz around the Winter Olympics, and the emergence of young homegrown athletes, such as speed skater Kim Bo-reum and figure skater Choi Da-bin, also fueled the public's interest in winter sports in general.

On the other hand, PyeongChang said some of the volunteers weren't as professional as others, and that it will have to do a better job with volunteer training for the Olympics. And while the competition venues themselves were hailed for their high quality, not all had sufficient facilities for fans inside, such as concession stands.

PyeongChang also said it will have to strengthen language services for foreign spectators.

"We'll address our shortcomings and get ready for the Olympics the best we can," Yeo said. (Yonhap)