Prosecutors are expected to indict ousted President Park Geun-hye this week and wrap up their investigation into the corruption scandal that brought her down, legal sources said Sunday.

Woo Byung-woo, former senior presidential secretary for civil affairs, is likely to be put on trial along with Park for his alleged involvement in the scandal, they said. 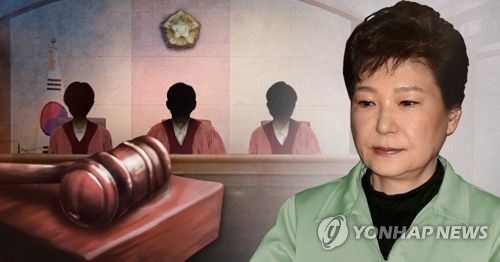 (Yonhap)
A senior prosecution official earlier said Park could be indicted Monday on a string of charges including bribery, abuse of power, coercion and leaking government secrets.

The former president went through five rounds of questioning at a detention center south of Seoul after she was arrested late last month over the allegations centered on her friend Choi Soon-sil.

Prosecutors have been mulling over whether to indict Woo at the same time, after a local court refused to issue a warrant to arrest him last week.

He is accused of aiding and abetting Choi in meddling in state affairs and amassing profits using her ties to Park. Prosecutors have been accelerating their probe to wrap it up before the race for the May 9 presidential election goes into full swing with the official campaign period slated to kick off on Monday.

A total of 15 people have launched official bids to become the country's next president as the two-day candidate registration period ended earlier in the day, according to the election watchdog. (Yonhap)