[ The Korea Herald – Send E-mail ]
Now is time to invest in Korea: Moon
By Jo He-rim
Published : Apr 12, 2017 - 16:12
Updated : Apr 12, 2017 - 17:41
Presidential candidate Moon Jae-in of the Democratic Party of Korea asked for active investment from foreign investors Wednesday, while also vowing to raise government support in a meeting with the chambers of commerce for the United States and Europe in Korea.

In the meeting, organized by Moon’s campaign, the front-runner in the presidential race reiterated his election pledge to create some 810,000 new jobs in the public sector and pledged to “promote a new economic paradigm for continuous development of the nation.” 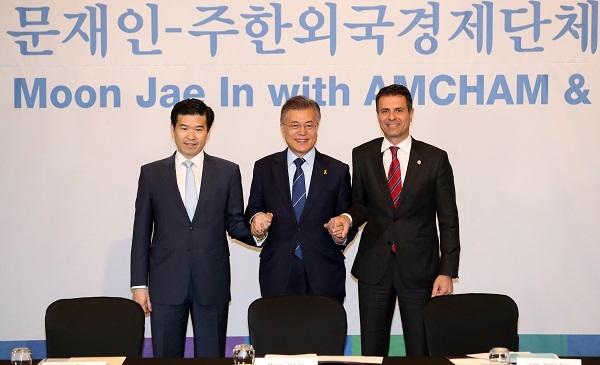 Moon Jae-in (center), the presidential candidate of the Democratic Party of Korea, poses with James Kim (left), CEO of GM Korea and chairman of the American Chamber of Commerce in Korea, and Dimitris Psillakis, CEO of Mercedes-Benz Korea and chairman of the European Chamber of Commerce in Korea in Conrad Hotel in Seoul, Wednesday. (Yonhap)
The liberal candidate expressed gratitude to the 16,000 foreign-invested corporations in Korea for their contribution to the local economy. Foreign-invested firms make up 20.9 percent of the nation’s total exports and 5.7 percent of jobs, his camp said.

“You are already playing a great role in the development of the South Korean economy,” Moon said, asking for further help in creating more jobs in the private sector.

Citing a slowing growth rate, increase in labor costs and strict regulations as some of the difficulties that overseas investors may face, Moon promised to solve such issues if he is elected as the nation’s leader.

“When we look at the foreign direct investment rate to the national GDP, it only reaches 12.9 percent, which is far below the average rate of 35.6 percent of the Organization of Economic Cooperation and Development,” Moon said. “I will actively support foreign investors and alleviate government regulations to boost their investment.”

“One of our top objectives is to generate more economic opportunities for (the) Korea-US FTA and foreign trade investments,” Kim said. “We have seen more Korean companies join AMCHAM and I am committed to help both Korea and US members.”

The ECCK chief also said the chamber seeks to work closely with South Korea and appealed to the audience citing the stability of European markets.

“Europe and South Korea have long maintained a close relationship. At times like this, it is important to explore and expand more fiscal opportunities,” Psillakis said.

Also present at the forum were David Ruch, the former head of AMCHAM, Amit Larova, managing director of 3M Korea, Bill Miner, a member of AMCHAM’s board of directors, Andre Schmidtgall, the vice chairman of the ECCK and head of Ikea Korea, and Park Hyun-nam, managing director and co-head of Deutsche Bank’s Seoul branch.