It cited the spirit of the bilateral alliance that dates back to the 1950-53 Korean War.

"(Such a military operation, if any,) will be conducted under the robust South Korea-US combined defense posture based on their close cooperation," the ministry's spokesman Moon Sang-gyun said at a press briefing. 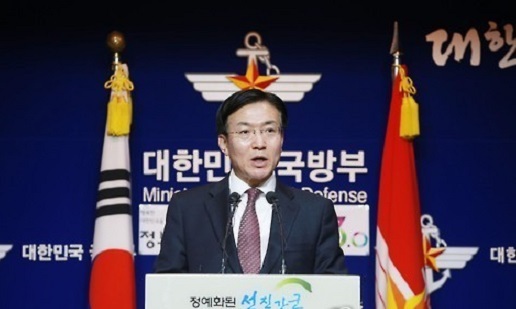 South Korean Defense Ministry's spokesman Moon Sang-gyun (Yonhap)
He was responding to mounting concerns here that the Trump government may seek a pre-emptive attack on the North similar to its recent airstrikes against Syria.

The US fired 59 Tomahawk cruise missiles last week at an air base in Syria in response to the Syrian use of chemical weapons.

Many observers construed it as a tough warning message to the North's Kim Jong-un regime bent on developing nuclear and missile programs.

Some also raise the possibility that the US may consider a "decapitation" strategy, a targeted attack to remove the enemy's leadership.

Moon, however, would not use such words as "prior consultations" or "consent" directly between Seoul and Washington over such a military operation that could lead to a full-fledged war on the peninsula.

"Close coordination includes that," he only said when asked repeatedly to clarify the government's view. "It's in line with the alliance spirit."

On a question about whether a pre-emptive US strike on the North will be in breach of the 1953 Armistice Agreement, the official said he would not talk about a "hypothetical" matter.

South Korea and the US have the Mutual Defense Treaty, signed in 1953, which establishes their security commitment in the event that a party comes under attack from an enemy. It has no specific stipulation on any pre-emptive attack.

The two sides have operated the Combined Forces Command for a joint defense strategy.

On Monday, Moon Jae-in, the presidential candidate of the liberal Democratic Party, stressed that South Korea should take the initiative in handling the North Korea issue.

He said the US should not make a pre-emptive strike on the North without the consent of the South Korean people.

The ministry official, meanwhile, denied rumors of a war crisis within the coming weeks, asking the public not to be misled by unconfirmed information spreading on cyberspace.

Meanwhile, Army Col. Roh Jae-cheon, spokesman for South Korea's Joint Chiefs of Staff, also told reporters that there has been no indication of unusual activity by the North's troops. (Yonhap)