Unification Minister Hong Yong-pyo made the remarks amid reports that the US is reviewing "a full range of options" to the nuclear and missile threats North Korea poses to Washington and its allies.

The minister said that the government cannot help taking into account repercussions of Washington's possible military strikes against the North in terms of national security. 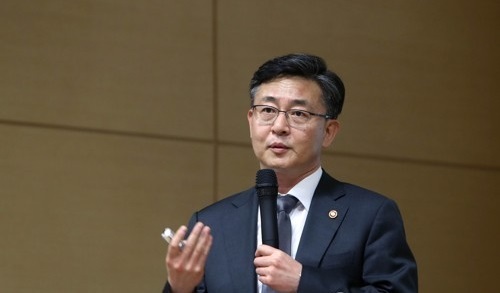 (Yonhap)
"The issue of (Washington's potential) pre-emptive strikes may be aimed at resolving North Korea's nuclear problems, but for us, it is also related to defending the safety of the public," Hong told reporters.

"(I think) the incoming government is expected to closely cooperate with the US over the issue," he added.

Hong also warned that inter-Korean dialogue should not be hastily pursued, stressing that it is important to set up a strategy in making North Korea abandon its nuclear weapons obsession.

He cited a memoir released by North Korea on March 31 to mark the fourth anniversary of leader Kim Jong-un's policy of the dual pursuit of nuclear and economic development.

In the memoir, North Korea claimed that the US should be accustomed to Pyongyang's status as a nuclear state whether it likes it or not.

North Korea is seeking to make its strategy of becoming a nuclear state as a fait accompli by conducting nuclear tests and firing ballistic missiles, the minister said.

"We are standing at a crossroads in choosing between getting used to North Korea's claim of possessing nuclear weapons and making North Korea break a bad habit," Hong added.

His remarks come amid speculation that North Korea could make nuclear or missile provocations this month, with the country set to mark key anniversaries.

The government has employed a sanctions-oriented approach toward North Korea. (Yonhap)