The California-based mobile social networking service operator signed an agreement with Korea Innovation Center of the Ministry of Science, ICT and Future Planning and Institute for Information & Communications Technology Promotion to support AR and VR startups at Facebook Korea Office in southern Seoul.

Under the agreement, Facebook and the government agencies will select the 10 most promising AR and VR firms in Korea and send their employees to Silicon Valley for 10 weeks to learn about related technologies and business development from engineers of Oculus VR, a subsidiary of Facebook.

It is the first time that the Facebook subsidiary has partnered with a foreign government to help nurture such startups. 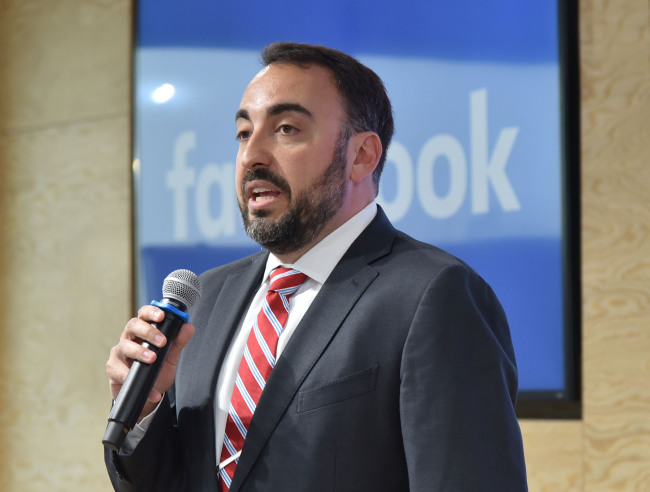 “From low-latency competitive gaming to HD video streaming, the Korean market has been the place where the rest of the world can look to see our online future,” Stamos said. “Facebook gets such great insights from the people and partnerships in Korea, and why we use our experiences here to foresee how the global market will evolve in the future.”

Facebook has been recently focusing on Korean companies with AR and VR technologies upon a high-bandwidth and low-latency networking system, which have the great advantage of technical and intellectual infrastructure, Stamos said. The company believes when the Korean startup ecosystem works closely with its people in Silicon Valley, Korean firms will benefit from improved reach and innovation, he said.

“Korean companies have a fantastic advantage due to the technical and intellectual infrastructure in these areas, and we are extremely excited to partner with both large and small Korean enterprises as we work to bring VR and AR to the world,” the CSO added.

Currently, there are about 30 out of 138 firms that are willing to apply for the program, according to KIC. Companies that have made some achievements from their research and development efforts would be preferred.

“Outstanding technologies and companies may be considered by the Facebook headquarters for future M&A or supply pool,” said Park Dae-sung, head of policy at Facebook Korea. “We hope to see some very innovative products from killer content to hardware through this program.”

The chosen startups could possibly get a chance to commercialize their technology or product with Oculus, he added. After the 10-week program in Silicon Valley from May through July, the companies will present their progress at a demonstration event in late July.

Facebook has been cooperating with local governments here since 2015 to support startups.

Since last September, the company is providing training for female business leaders in partnership with the Seoul Metropolitan Government, known as “She Means Business.”

Since March, it has offered an educational program named “#MadeByKorea” to about 100 small exporters with Korea Trade Investment Promotion Agency.