The figures showed the internet-only bank is off to a smooth start, as the numbers drastically contrasted with the some 12,000 bank accounts created per month through 16 commercial banks’ online services in Korea for a year from December 2015. 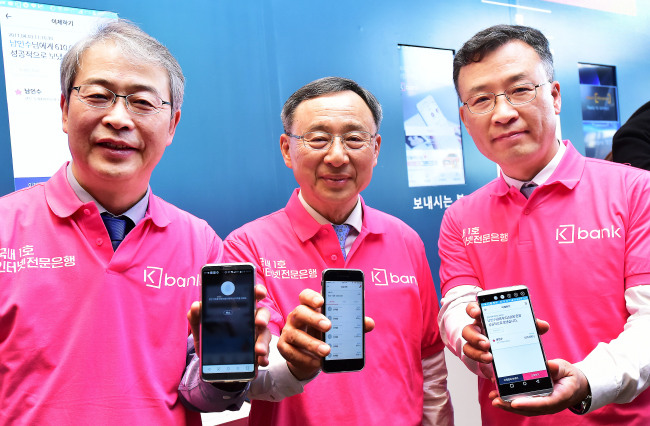 Financial Services Commission Chairman Yim Jong-yong (from left), KT chief executive Hwang Chang-gyu and K bank CEO Shim Sung-hoon pose at the opening ceremony of the K bank at KT Square in Gwanghwamun, Seoul. (Yonhap)
The online-only bank saves costs by offering its banking services through its mobile app without brick-and-mortar branches and with a minimum numbers of employees -- less than 2 percent of a local commercial bank. With the cost savings, K bank aims to allow subscribers to enjoy higher deposit interest and lower loan interest rates. Loans are extended at an interest rate about 1-2 percentage points lower than existing commercial banks.

K bank is based on a consortium made up of 21 stakeholders. Some of the shareholders are not involved in the banking industry, including telecommunications giant KT, which owns the largest share of 8 percent. They have raised calls for a deregulation that would permit them to own up to 50 percent of the online-only bank’s shares.

The nonbanking firms see the move as the only way to increase K bank’s capital by 200-300 billion won to meet the BIS capital ratio. Yim Jong-yong, chairman of the Financial Services Commission, has endorsed the demand.

However, the National Assembly has failed to pass the revision bill tabled in June 2016. Lawmakers of the liberal Democratic Party of Korea opposed it, citing concerns that private companies might misappropriate the banks as havens for slush funds and that internet-only banks might reduce jobs here.