Shanghai Salvage, the company that recently raised the sunken Sewol Ferry, will conduct a two-month-long, 32,000-square-meter-wide search of the seabed where the ship remained, the Ministry of Oceans and Fisheries said. The aim of the search is to find the remains of those still missing and other clues that can shed better light on the sinking.

Sewol Ferry arrives in Mokpo (Yonhap)
In 2015, with the Chinese consortium led by the state-run Shanghai Salvage won the 85.1-billion-won ($72 million) bid to pull the ferry out of the water intact.

The ministry said the area has been divided up into 40 zones for 50 divers to conduct a detailed search. Authorities said underwater steel fences, three meters high, have been set up around the area where the Sewol sank.

After an initial search, Shanghai Salvage will carry out a second search using sonar. It also plans to bring back the left rear ramp of the Sewol, which was cut off during the salvage process. 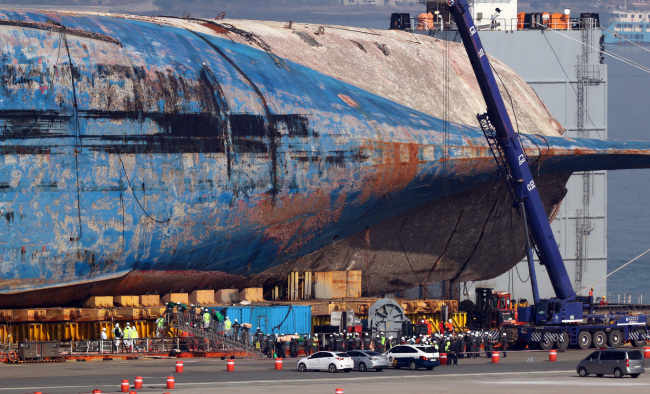 The salvaged Sewol Ferry (Yonhap)
The Sewol arrived at Mokpo last week but is still docked on a semisubmersible ship due to time needed to transport it to land.

The ministry plans to drill a drainage hole in the left side of the ship to reduce its weight.

Meanwhile, nine bone fragments, along with a passport and other personal belongings, were discovered on the deck of the submersible ship carrying the Sewol early Sunday but on-site inspectors determined the bones were from animals.

The passport was found to be that of Lee Joon-seok, the Sewol's 70-year-old captain who is serving 36 years in prison for negligence and dereliction of duty. (Yonhap)