According to the sources, the creditors, led by the state-run Korea Development Bank, are also pressing the labor union of Daewoo Shipbuilding to accept a pay cut and job cuts as well. 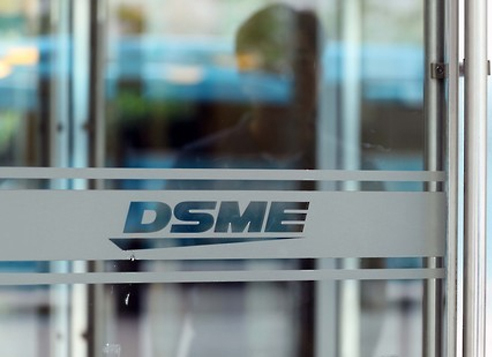 (Yonhap)
Late last month, the creditors announced a fresh rescue package worth 6.7 trillion won ($5.98 billion) for the ailing shipbuilder, but only if all stakeholders agree to a debt-for-equity swap plan.

The huge rescue measures represent the second round of bailouts for the shipbuilder that has been suffering from severe liquidity problems over heavy losses in its offshore projects.

Under the rescue package, Daewoo Shipbuilding will receive new loans worth 2.9 trillion won if lenders and bondholders agree to swap 2.9 trillion won of debt for new shares in the shipbuilder.

Bondholders are also required to give a three-year grace period to the repayment of the remaining debt.

The KDB demanded that commercial lenders present a written pledge to join the massive debt-for-equity swap and other rescue measures by Friday. Under the proposed rescue plan, commercial lenders are required to swap 80 percent of their unsecured loans worth 700 billion won into Daewoo Shipbuilding stocks, and the maturity of the remaining loans should be extended by five years.

But commercial lenders countered that KDB and the Export-Import Bank of Korea should shoulder more of a burden, demanding that the two policy lenders' haircut ratio should be further raised.

They also demanded that new Daewoo Shipbuilding stocks be sold at a lower-than-proposed price, and perpetual bonds to be sold by Daewoo Shipbuulding to the EXIM Bank should carry a lower rate as well.

But the state lenders and the government sternly rejected their calls saying that unless they agree on the debt-for-equity swap plan, Daewoo Shipbuilding will be placed under a new corporate rehabilitation program, which is a combination of a debt workout and court receivership, resulting in more losses to interested parties.

Finance Minister Yoo Il-ho said last week that the government wants all concerned parties to join the proposed rescue plan for the shipyard, the world's largest by order backlog.

Acting President Hwang Kyo-ahn also said the fresh funding for the shipyard was inevitable urging all creditors to share the pain.

The KDB-led creditors also have asked the shipyard's labor union to submit a written pledge by the end of next week not to launch any strikes in protest over bold restructuring moves, which they see as leverage to pressure corporate bondholders and commercial lenders to join the debt rescheduling plan.

Earlier, the labor union said that it is willing to accept a proposed pay cut for workers from the shipyard's creditors.

Jung Sung-leep, president of Daewoo Shipbuilding, urged the company's workers earlier this week to share the "pain," adding that he will return 100 percent of his salary as part of a drive to cut costs. (Yonhap)