The suspect, a high school dropout with records of mental illness, is currently in police custody. She allegedly met the victim at a park in Yeonsu-gu, Incheon, on Wednesday afternoon and killed her with an unidentified weapon after luring the victim into her home with a phone. 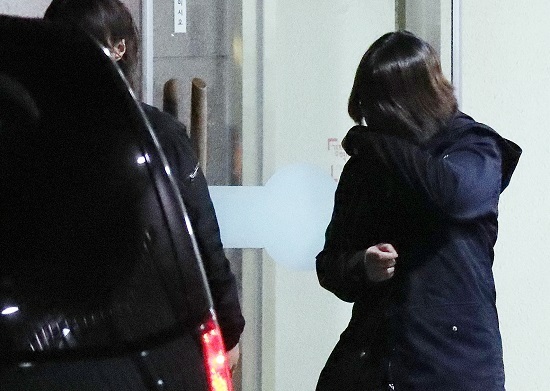 The suspect in a kidnap and murder case of an 8-year-old child is seen at Yeonsu Police Station in Incheon, west of Seoul, Thursday. (Yonhap)
The victim’s body, stuffed into two large garbage bags, was found at around 10 p.m. Wednesday, atop the roof of a facility that houses a water tank, the police said.

The two were neighbors who lived in the same apartment complex, but did not have prior contact.

Police found what they believe to be the murder weapon and other evidence at the suspect’s home.

Marks indicating strangling were found on the victim’s body. An autopsy is planned to determine the exact cause of the death.

The suspect, when confronted Wednesday by investigators, had said she did not remember well, speaking incoherently about her actions. She confessed to the murder later on Thursday.

Police suspect she had an accomplice, based on the assessment that the suspect would have found it difficult for the teenage girl to move the body to the top of the 4-5-meter building without help.

Police are also checking on the mental status of the suspect, after she told investigators that she had received therapy for the past seven years.

The teenager dropped out of high school last year after having difficulty adjusting to it. Her parents plan to appoint an attorney.

Depending on whether she had the deliberate intention to kill the child, she could face a punishment of up to 15 years in prison.