Mario Jesus Rodriguez, the secretary of economy of Oaxaca, and his team, are on a four-day visit to Korea where they hope to learn from the country’s economic development model, he said. 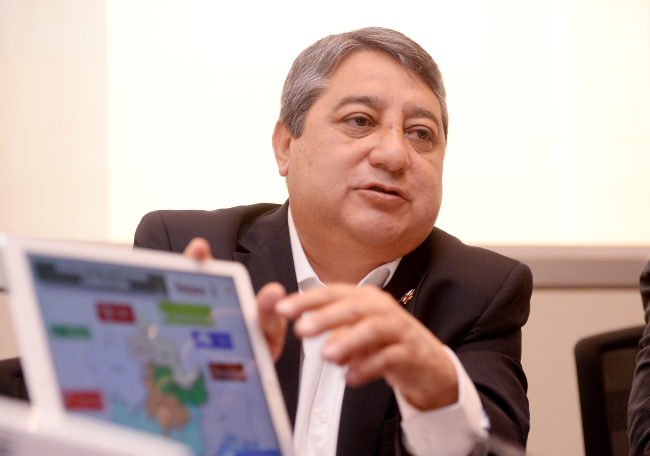 Mario Jesus Rodriguez, the secretary of economy of Oaxaca, speaks during an interview with The Korea Herald on Thursday. (Park Hyun-koo/The Korea Herald)
“South Korea is important because we know the success of South Korea,” Rodriguez said. “The way you built your country in the 60s and 70s, it is very similar to what we have in Oaxaca.”

The economic head of Oaxaca and his team visited South Korean logistics and port operators during the trip in order to cooperate in the areas where the newly elected governor has promised to make improvements.

In December, Gov. Alejandro Murat Hinojosa, who is a second generation politician in his 40s, was sworn in and pledged to build various infrastructures ranging from sewage treatment systems and garbage incinerators to seaports, airports, and highways.

Oaxaca is a southern state with a population of 4 million, about 60 percent of whom are involved with agricultural businesses. At 93,757 square kilometers, Oaxaca’s state contribution to Mexico’s gross domestic product is only 22nd out of 32 states.

“The state is full of agricultural, mining, forestry and ocean resources which might be attractive to foreign investors and providing an investment-friendly environment can attract investors,” Rodriguez said.

“We’re trying to create the right atmosphere for foreign investors,” he said, adding that Oaxaca is offering many tax incentives, including a zero percent income tax for the first 10 years.

This trip is a beginning of the cooperation between Oaxaca and Korea, he said. “Based on what we have learned this trip, we will find sectors that can create great synergy.”

In order to build further cooperation, the economic head of Oaxaca added that the local government is planning to open a Korea desk to promote bilateral investment.