The only female candidate in this year’s early presidential race and the mother of a 24-year-old son, Sim graduated from the elite Seoul National University, but devoted herself to labor activism. 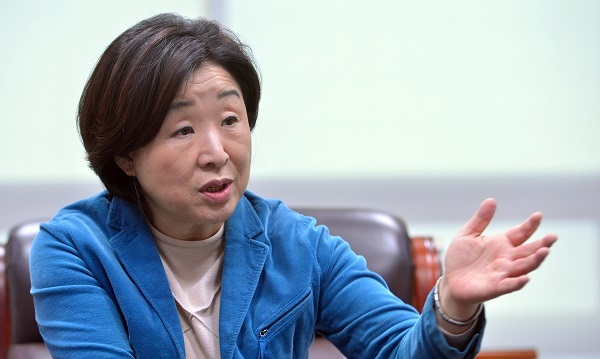 Sim Sang-jeung (Lee Sang-sub/The Korea Herald)
Instead of choosing a high-paying job at a conglomerate, she chose to work at a clothing factory at Guro industrial complex in 1983 and worked to establish labor groups inside factories.

Under the authoritarian regime of then-President Chun Doo-hwan, anything related to the labor movement was likely to get someone in trouble. Sim was on the police’s most-wanted list for a decade from 1984 to 1993.

In 1990, still on the run, Sim led the foundation of an umbrella labor group that is today called the Korean Confederation of Trade Unions. She headed the group as its inaugural chief.

“I still remember walking to the podium after I was introduced as the head of the organization and people looking at the door waiting for a man to enter,” Sim previously recalled to media outlets.

In 2004, ending her 25-year-career as a labor activist, Sim entered politics as a proportional representative of the now-defunct Democratic Labor Party.

In 2012 and 2016, she was elected to the National Assembly in a constituency in Goyang, Gyeonggi Province. She has been leading the Justice Party since July 2015.

Since joining the legislature, Sim has continued to challenge the Assembly with progressive ideas, unafraid to touch on sensitive issues such as homosexuality, animal rights and women’s rights.

She is also outspoken about financial reform and critical of chaebol passing on their wealth and control of conglomerates to family members.

As a presidential hopeful, she has pledged to promote labor rights, reduce working hours and introduce a social welfare tax.

As a working mom herself, the candidate also promises to relieve the burden of “super women” having to take care of their work and home at the same time.

Regarding her position as the only female presidential candidate, Sim was unmoved by the ouster of the nation’s first female President Park Geun-hye.

“It was only a personal failure of Park, not women. I wish for the voters to look at me, Sim Sang-jeung,” she said in an interview with The Korea Herald.