[ The Korea Herald – Send E-mail ]
Holding firm transition on hold: Samsung Electronics
By Korea Herald
Published : Mar 24, 2017 - 15:38
Updated : Mar 24, 2017 - 16:06
Samsung Electronics Vice Chairman Kwon Oh-hyun said Friday that it will be difficult to push for a transition into a holding company for now, delaying its decision on restructuring amid a corruption scandal that led to the arrest of Samsung’s de factor leader Lee Jae-yong.

His comments gave a negative signal on the tech giant’s plan announced in November to split the firm into a holding company and an operating unit within six months. 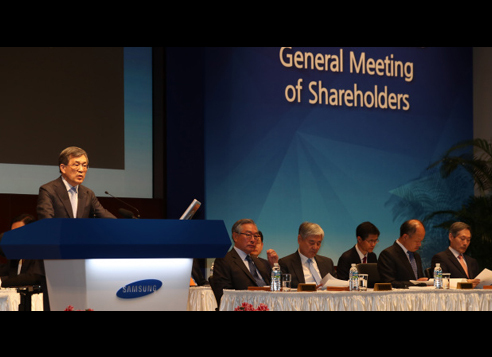 Samsung Electronics Vice Chairman Kwon Oh-hyun (left) speaks during the company’s shareholder meeting at its Seocho office in southern Seoul, Friday. (Yonhap)
“There could be some negative effects from transitioning into a holding company, so it is not easy to execute the plan at present,” Kwon said at the company’s annual general meeting of shareholders in southern Seoul. It was the first meeting of shareholders since the February arrest of Lee, vice chairman of Samsung Electronics, over his alleged role in the corruption scandal that led to the impeachment of former President Park Geun-hye.

He did not elaborate on what the negative impacts were but added that the company will finish establishing a governance committee comprised of outside directors by April, which will assess management plans and enhance communication with shareholders.

“After we review (the transition plan) in various aspects such as laws and tax codes, we will disclose our conclusion to shareholders.”

“The stock price fall seems to reflect that investors had not expected that Samsung would make such a comment (of putting the plan on hold),” said Yoon Tae-ho, an analyst at Korea Investment & Securities.

Adopting a holding company structure was recommended by US activist hedge fund Elliott Management in October.

Samsung’s delay on the transition plan might have been affected by Lee’s arrest on charges such as bribery and embezzlement, they said.

Lee is suspected of offering 43 billion won to two foundations controlled by Choi Soon-sil, a longtime friend of the former president, in return for the Park administration’s support in the 2015 merger of Samsung C&T and Cheil Industries through the National Pension Service, the largest shareholder of Samsung C&T. Lee and Samsung flatly deny all allegations.

Kwon apologized to shareholders for the company’s involvement in the scandal, but emphasized that the company did not commit any wrongdoing.

“The contribution, which was supposed to support public interest, has been used for a different purpose. The use of the contribution did not require a decision either from the boardroom or from the management committee,” he said.

At the meeting, Kwon also said Chinese chipmakers were a great threat to Samsung in the long term, in response to questions from shareholders.

Samsung Electronics is accelerating technology development to stay ahead of Chinese competitors, taking extra caution to prevent the leakage of key technologies and the loss of talented workforce, he said.