The "Korea Interdiction and Modernization of Sanctions Act" (H.R. 1644) is designed to strengthen last year's North Korea sanctions law by adding new measures, including new UN Security Council resolutions that have been billed as the toughest-ever sanctions on Pyongyang. 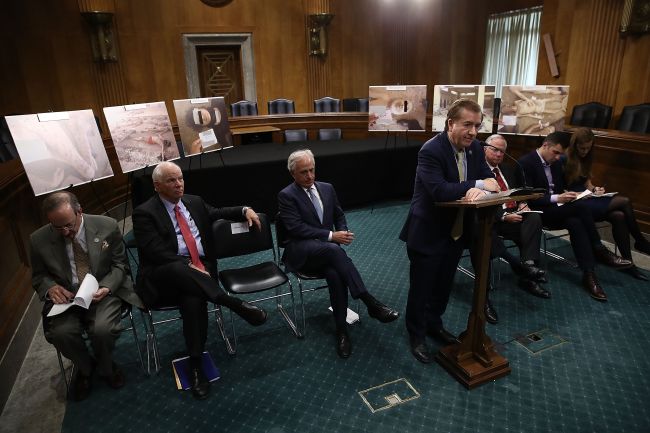 US House Foreign Affairs Committee Chairman Ed Royce (center) (Yonhap)
"North Korea's nuclear arsenal poses a growing and urgent threat to the United States. Soon, many believe the Kim Jong-un regime will be able to target all 50 states and our Asian allies with a nuclear warhead," Royce said in a statement.

"The new administration already has tools at its disposal to help counter this threat," he said, referring to last year's North Korea Sanctions and Policy Enhancement Act that the congressman authored. "It is clear that additional authorities will better allow the US to crack down on the Kim regime."

The new legislation, among other things, authorizes sanctions on those who "knowingly, directly or indirectly, sold, transferred or otherwise provided significant amounts of crude oil, condensates, refined petroleum, or other types of petroleum or petroleum byproducts to the government of North Korea."

It also prohibits "any ships owned by the government of North Korea or owned or operated on behalf of any country not complying with UN Security Council resolutions from operating in United States waters or landing at any US port," according to a summary of the bill.

The bill bans "goods produced in whole or part by North Korean forced labor from entering the United States. It also sanctions foreign persons that employ North Koreans who are forced to labor in inhumane conditions and are denied access to wages and benefits.

"Exporting forced labor to foreign countries is estimated to earn the regime billions of dollars of hard currency each year and represents a significant human rights violation," the summary said.

The legislation also calls for the US government to determine whether the North is a state sponsor of terrorism. (Yonhap)