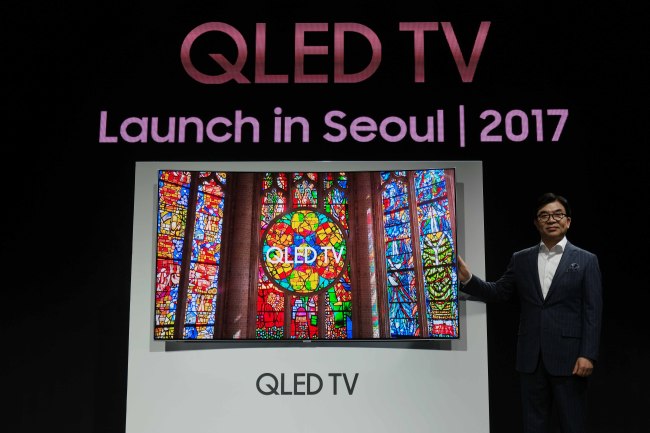 “Not to mention the best quality definition, a TV should have a design that fits in anywhere at home and should have functions customized for individuals, considering that average TV hours at home get shorter and shorter,” Kim said.

The flagship QLED TV series consisting of Q9, Q8 and Q7 feature an invisible connection cable to hide cables of all TV-connected devices and an adhesive wall mounting solution that minimizes space between the TV and wall.

The backside of the QLED TV models are made of metals intended to add to the home interior. Samsung also offers an easel-type TV stand for the QLED models, which enables installation of a TV in the middle of a studio.

Samsung ditched the previous Super Ultra High Definition brand name for its TV display and adopted the QLED brand that was first unveiled at the Consumer Electronics Show in January.

Due to the similarity of the name to LG’s OLED TV series that was first launched in 2013, a controversy had ensued globally over Samsung’s comparison of its QLED to its rival.

While Samsung pushes QLED as the company’s most premium lineup aimed at LG’s OLED, critics say the two brands are not comparable technologically.

“Technically, the QLED is LCD panel-based, which consumers should not confuse with OLED,” said a source in the display industry. OLED uses organic light-emitting diodes that glow when an electric current is introduced.

Mindful of Samsung’s QLED brand marketing, LG Electronics is actively promoting its Nano Cell TV, the second-highest level in the company’s premium product lineup, which was launched a month earlier than Samsung’s.

As for the display dispute, Samsung highlights color volume of the QLED TV series.

“With QLED TV, we also want to put an end to the controversy over high definition,” Kim said. “Our QLED TV is the world’s first to represent 100 percent of color volume.”