The court upheld an injunction request filed by five parents who accused the school authorities of breaking rules in their decision to adopt the textbook. Liberals criticize the state-issued book for its allegedly biased interpretation of events in the nation's modern history. 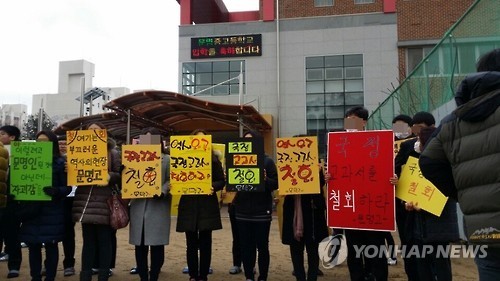 Students and parents hold up signs at Munmyeong High School in Gyeongsan on March 2, to demand that the school cancel its adoption of state-authored history textbook. (Yonhap)
Munmyeong High School in Gyeongsan, 331 kilometers southeast of Seoul, applied for the use of the textbook and subsequently became the only school designated by the government to use it this year.

The parents filed a suit with the Daegu District Court earlier this month seeking the cancellation of the designation, and made a request to the court to suspend the adoption pending the court's ruling. The plaintiffs claimed that the head of the school's foundation and the principal unilaterally applied for the designation.

The conservative Park Geun-hye administration introduced the book to correct what it viewed as a left-leaning, pro-North Korea bias in private publishers' textbooks.

The new textbook, however, has been slammed by critics for glorifying the military regime of Park's father Park Chung-hee, who ruled the country for 18 years after a coupe until he was assassinated in 1979.

The textbook is to formally go into use next year. (Yonhap)