As with the first time, it was not by her own will, but a forced move that had left her in a somber mood. Yet, the former president smiled, at least to her supporters gathered in front of her old home in Samseong-dong to greet her. 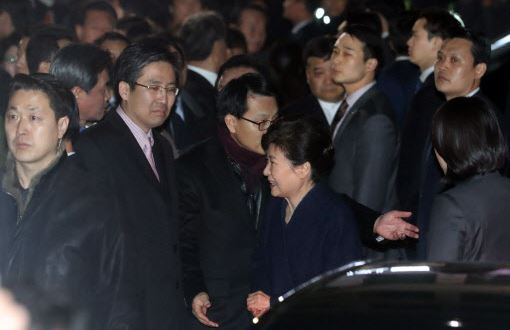 Former President Park Geun-hye smiles to her supporters gathered in front of her old home in Samseong-dong to greet her. (Yonhap)
Born in 1952 as the eldest child of longtime strong man Park Chung-hee, she entered Cheong Wa Dae with her parents and her two younger siblings in 1963 as her father was sworn in as nation’s fifth president.

In 1974, her mother, first lady Yuk Young-soo, was assassinated, leaving the 22-year-old Park to assume the role of the country’s first lady.

Only five years later, her father was assassinated in 1979, forcing her first tragic farewell to the presidential palace.

Following her departure from Cheong Wa Dae, Park lived in seclusion for 18 years until she joined the Grand National Party and started at the task of building up her career in politics.

It was in 2013 that she returned to her old home Cheong Wa Dae, as she was inaugurated as the 18th president of the nation.

After four years and one month of her five-year term, Park was pushed out from the presidential office for the second time in her life, becoming Korea’s first president to be removed from office by impeachment.

Park on Sunday evening moved back to her Samseong-dong home in southern Seoul. It was two days after the Constitutional Court upheld the impeachment motion to oust her from office on Friday.