The Democratic Party of Korea, which led the parliamentary campaign to impeach President Park Geun-hye, on Friday hailed the Constitutional Court’s decision to uphold the sacking, calling it the “people’s triumph.”

“The Constitutional Court made a historical decision today and proved that the nation still maintains its rationality after it was brought down by corruption,” party Chairwoman Rep. Choo Mi-ae said in a press conference after the verdict was announced.

It marked the victory of millions of ordinary citizens who took to the streets for the weekly candlelight vigils to demand Park’s ouster, she added. 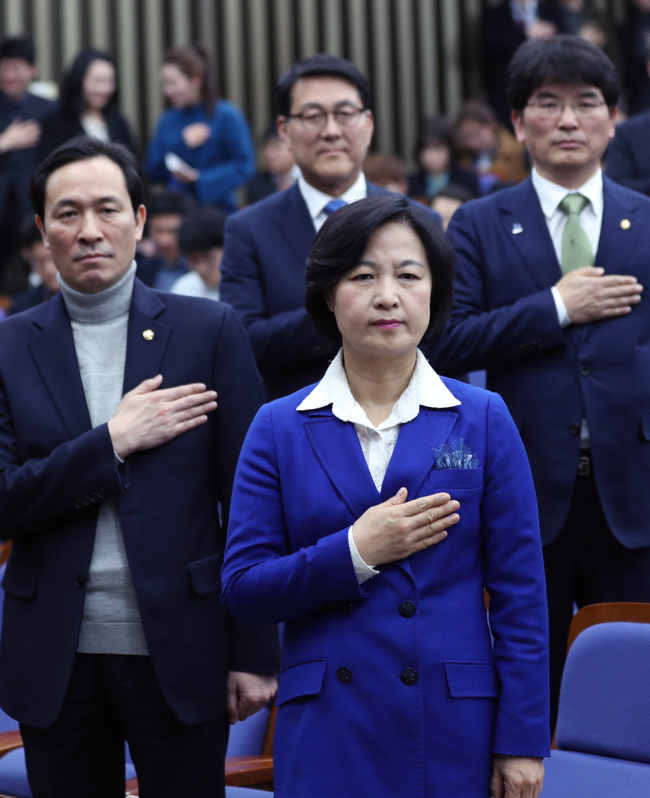 Choo Mi-ae (Yonhap)
Since the scandal broke out in late October, a total of 15.6 million people have participated in the anti-Park protests across the nation, according to the organizers.

The liberal party leader also used the occasion to attack acting President Hwang Kyo-ahn, who has emerged as a potential presidential candidate from the rival conservative camp.

The prime minister who has been substituting for Park is partly responsible for Park’s fall, Rep. Choo insisted, saying the acting president should limit his exercise of authority to a minimal level.

“We witnessed the value of the First Amendment of our Constitution today. History moves forward with great people,” Moon said in a statement.

The splinter conservative Bareun Party, which broke off from Park’s Liberty Korea Party in January, also welcomed the court’s decision.

“It is a historical moment in which a new history begins. Today’s ruling showed that our decision to break off (from Park’s party) and join the campaign for the parliamentary impeachment was right,” the party said.

The party’s leaders, including Chairman Rep. Choung Byoung-gug, resigned en masse to clear the way for a new leadership.

“The Bareun Party led the impeachment (movement) to protect South Korea’s justice and the Constitution. Now I will step aside and let a new figure lead at this turning point,” Rep. Choung said.

The centrist opposition People’s Party also vowed to work for the nation’s comprehensive reform and prepare for a fair competition in the upcoming presidential election, which is likely to take place on May 9.