[ The Korea Herald – Send E-mail ]
Park’s political party accepts verdict
By Jo He-rim
Published : Mar 10, 2017 - 15:09
Updated : Mar 10, 2017 - 15:13
The conservative Liberty Korea Party, who had supported former President Park Geun-hye, said Friday that it would accept the Constitutional Court’s decision to oust her, apologizing to the public for its failure to assist the president as a ruling party.

“We also apologize for failing to protect the nation’s dignity and the people, and failing in our duty as a ruling party,” the party’s interim leader In Myung-jin said. 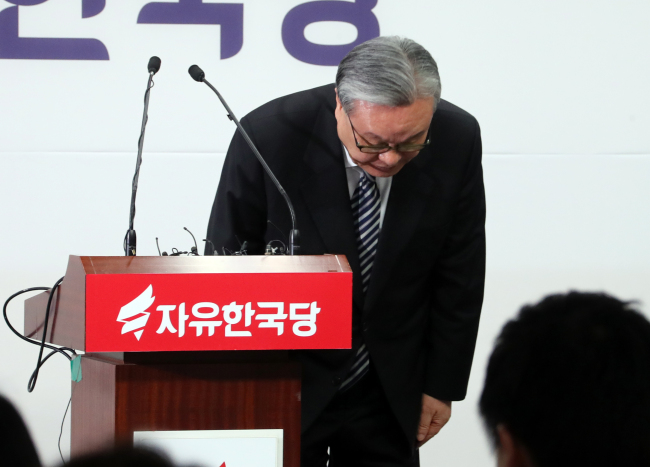 In Myung-jin (Yonhap)
“We are not a ruling party anymore. We promise to promote extensive reforms of our party and the nation.”

The party had supported Park even after the massive corruption scandal involving the former president and her confidante Choi Soon-sil erupted in October. It had opposed the parliamentary impeachment of Park, which passed through the National Assembly on Dec. 9.

In the face of the growing scandal, 30 lawmakers had left the former Saenuri Party, which had 126 lawmakers then, to create the Bareun Party, distancing themselves from the former president. The remaining 94 lawmakers changed the party’s name to the Liberty Korea Party in an effort to improve its tarnished image.

It is speculated that more Liberty Korea Party lawmakers might defect to the Bareun Party or other opposition parties ahead of the presidential election possibly slated for early May.

The Liberty Korea Party, however, dismissed the call from the Bareun Party to give up their parliamentary seats to take responsibility for the scandal and the presidential impeachment.

Meanwhile, opposition parties including the Democratic Party of Korea and the People’s Party praised the court’s decision.