[ The Korea Herald – Send E-mail ]
Culture Ministry pushes for ‘anti-blacklist’ bill
By Yoon Min-sik
Published : Mar 9, 2017 - 16:09
Updated : Mar 9, 2017 - 16:09
The Ministry of Culture, Sports and Tourism on Thursday vowed to push for legislation that would protect artists from discrimination, including political oppression, as part of its follow-up measure aimed at preventing the government from drawing up a blacklist of cultural figures.

Investigation of the corruption and influence-peddling scandal involving President Park Geun-hye and her confidante Choi Soon-sil has revealed that the ministry kept a list of artists who were to be excluded from receiving financial support from the government. 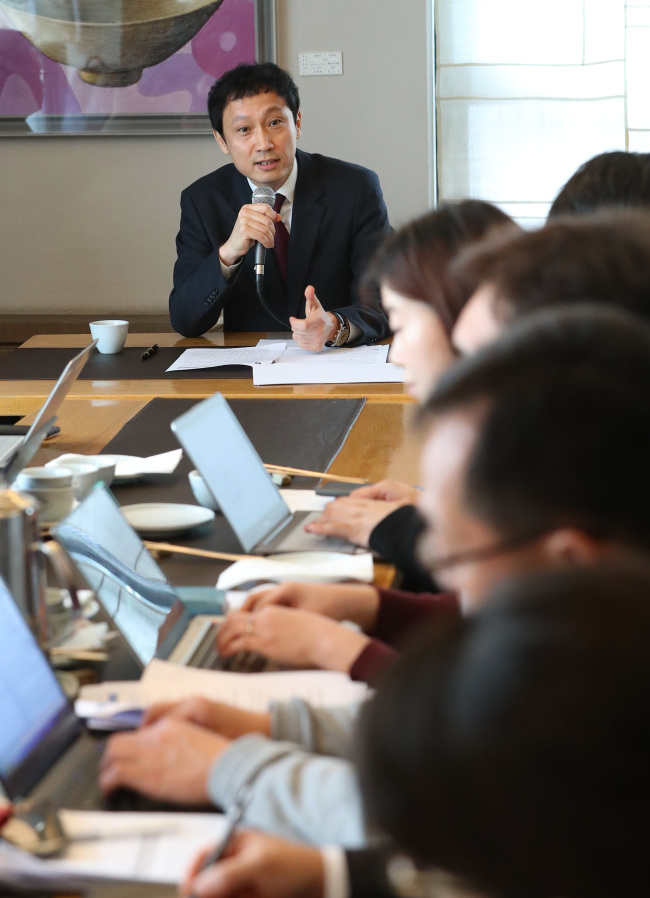 Kim Young-san, deputy minister for culture and arts policy, speaks to reporters in a Seoul restaurant on Thursday. (Yonhap)

After the ministry’s official apology in January, following the arrest of its former director Cho Yun-sun, it rolled out a series of plans designed to prevent a recurrence of such a case.

The plan sees the creation of an independent rights committee for artists charged with monitoring violations of artists’ rights. The commission would have the authority to request correction of any wrongdoings as well as request punishment of perpetrators.

The government also seeks to guarantee the autonomy of the Arts Council Korea and Korean Film Council, which subsidize artists, while ensuring their screening processes are transparent.

As part of the move, the ministry seeks to revise regulations concerning the appointment of heads of the Arts Council Korea and Korean Film Council so that they could be picked by those in the art scene. Currently, the culture minister makes the appointments.

It will also revise the guidelines for civil servants at the ministry to include a clause guaranteeing protection for those who refuse unjust orders from a superior.

The ministry has also revived several projects that were deemed to have been abolished due to discrimination.

However, questions remain as to the effectiveness of the plans, such as how to ensure that state-run bodies will remain free from government intervention.

Culture Ministry officials stressed that not all the details have been finalized yet, and that the plans represent an outline of the ministry’s direction.

“We will have to hold discussions with artists, but the basic direction is to secure autonomy of the committees,” said Kim Young-san, deputy minister for culture and arts policy.

In terms of weeding out those who played a part in the creation of the blacklist, the ministry said it will leave it to the investigative authorities.