[ The Korea Herald – Send E-mail ]
N. Korea to expel Malaysian envoy in row over airport killing
By 김윤미
Published : Mar 6, 2017 - 21:00
Updated : Mar 7, 2017 - 09:49
North Korea said Monday it has decided to expel the Malaysian ambassador to Pyongyang in a deepening row over the killing of the half-brother of the North's leader Kim Jong-un.

The North's official KCNA news agency said Pyongyang designated the Malaysian envoy as "persona non grata" and ordered the envoy to leave the country within 48 hours from 10 a.m. on Sunday.

The report came shortly after the North's ambassador to Malaysia was heading home after being expelled from the Southeast Asian country over his criticism against Malaysia's probe into the death of Kim Jong-nam.

The Malaysian ambassador to North Korea, Mohamad Nizan Mohamad, was already recalled last month for consultations as the two nations are locked in a bitter war of words over the killing. 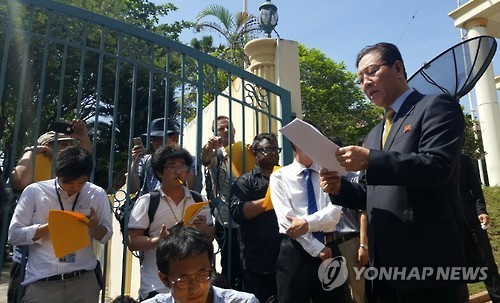 This photo, taken Feb. 20, 2017, shows Kang Chol (R), the North Korean Ambassador to Malaysia. Kuala Lumpur decided last week to expel Kang, ordering him to leave the country by March 6, 2017, amid a deepening diplomatic row over the two countries following the death of the half brother of North Korea's leader. (Yonhap)
Before boarding a flight for Beijing, the main transit point toward Pyongyang, on Monday, Kang Chol, the North Korean envoy, voiced strong regrets over his expulsion, repeating that the probe was biased.

Kang described his expulsion as an "extreme measure" that could undermine bilateral ties between North Korea and Malaysia, while arguing that his criticism over Malaysia's investigation into the killing of Kim Jong-nam was "fair."

Earlier last week Malaysia canceled a visa-free travel deal with Pyongyang in response to the North's criticism that Malaysia colluded with South Korea for its probe into the killing of Kim Jong-nam.

Prime Minister Datuk Seri Najib Razak told reporters on Monday that his country has decided to expel Kang in a bid to defend its sovereignty and national pride, according to Malaysia's New Straits Times.

The prime minister said Kang should have apologized for making baseless allegations against Malaysia, but has yet to do so, the report added.

Malaysian police said that eight North Koreans are suspected of being involved in the death, along with the two women.

Ri Jong-chol, who was taken into custody, was released and deported last week due to a lack of evidence.

Four North Korean suspects are believed to have fled Malaysia to Pyongyang on the day of Kim's death. Police are looking for three others including Hyon Kwang-song, the second secretary at the North's embassy in Malaysia.

There is speculation that Malaysia is considering cutting off its diplomatic ties with Pyongyang, which have been maintained for more than 40 years. (Yonhap)