[ The Korea Herald – Send E-mail ]
Korea, MERCOSUR to launch trade talks in first half
By KH디지털2
Published : Mar 3, 2017 - 10:22
Updated : Mar 3, 2017 - 10:22
South Korea and the South American trade block MERCOSUR will launch their official negotiations on a trade pact before the first half of this year, the trade ministry here said Friday, amid the country's efforts to tap deeper into the region.

South Korea's Trade Minister Joo Hyung-hwan and Susana Malcorra, the foreign minister of Argentina, the chair country of MERCOSUR, signed a joint statement to open the trade talks in Buenos Aires on Thursday (local time), according to the Ministry of Trade, Industry and Energy.

The two sides will hold the first meeting in June after completing domestic procedures, added the ministry. 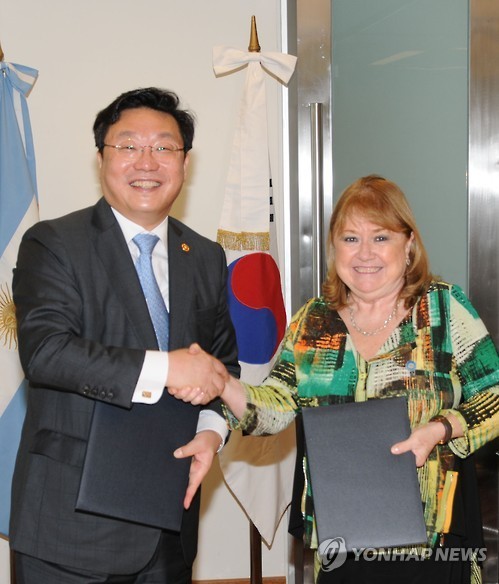 South Korea's Trade Minister Joo Hyung-hwan (L) shakes hands with Susana Malcorra, the foreign minister of Argentina, after signing the joint statement on a trade deal with MERCOSUR in Buenos Aires, Argentina, on March 2, 2017. (Courtesy of the Ministry of Trade, Industry and Energy)
MERCOSUR, which means the Southern Common Market in Spanish, consists of Argentina, Brazil, Paraguay and Uruguay,

It has a total population of 286 million people and its economic size is estimated at $2.78 trillion, accounting for 45 percent and 52 percent of the South American continent's population and gross domestic product, respectively.

They first had talks on the free trade deal in 2004 but had failed to make progress for more than a decade.

South Korea has been widely focusing on expanding free trade agreements, with many economies for years since 2003, when it first signed an FTA with Chile.

It now has FTAs with world economic powerhouses, such as the European Union, the United States and China, including the latest FTA with six Central American countries. (Yonhap)