North Korea on Thursday vowed to take its "toughest' military counteractions against South Korea and the United States as the allies kicked off their annual military exercise.

Seoul and Washington started their two-month long joint drill on Wednesday amid high tension sparked by Pyongyang's launch of a new ballistic missile last month. The North has long denounced the exercise as war rehearsal for a northern invasion. 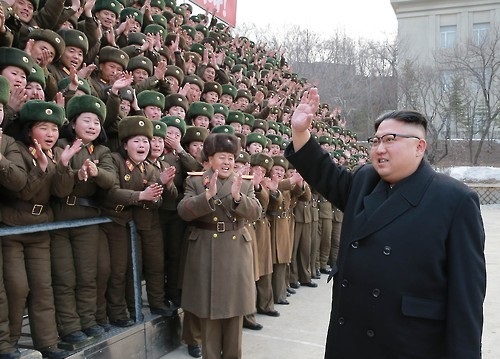 (Yonhap)
The General Staff of the Korean People's Army warned that Seoul and Washington will face a miserable end if they provoke it as it is ready to "mercilessly" deter any nuclear aggression.

"Our army will counter them with the toughest counteractions as it had already declared," as South Korea and the US kicked off war drills against the North, showed a statement by the military carried by the Korean Central News Agency.

"This stand of ours clarified before the world is by no means empty talk." it said.

In response to the threats, South Korea's defense ministry said it will sternly retaliate against North Korea if provoked.

North Korea has ratcheted up tension on the divided peninsula as it conducted two nuclear tests and launched ballistic missiles.

On Feb. 12, Pyongyang fired off a new intermediate-range ballistic missile toward waters off its east coast. The missile, launched at a high angle, flew about 500 kilometers.

The North has insisted that its development of nuclear weapons is a deterrent against what it calls Washington's hostile policy toward it.

The KCNA said North Korea's military is ready to take merciless military counteraction if Seoul and Washington fire off even a single shell into waters controlled by North Korea.

"The KPA will immediately launch its merciless military counter-actions," it said. (Yonhap)