The company has now applied this technology to its new smart farm business. Based on analyses of data on the environment inside the greenhouse as well as on external weather conditions, such as temperature, humidity, intensity of illumination, a smart farm can be managed automatically and remotely. This facilitates the operation of large-scale farms and ensures systematic farm management based on numerical representations of management indices. 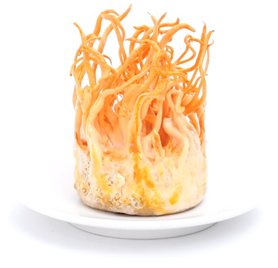 Cordyceps
For its first project, Autofactory chose a cordyceps farm -- as cordyceps is widely known to be difficult to cultivate artificially. Cordyceps is a medicinal mushroom that is used to strengthen immunity and overcome fatigue and has anti-cancer benefits. CEO Lee Jae-wook said, “Because of its many well-known health benefits, there is a high demand for cordyceps in not only Korea but China as well. However, due to its high sensitivity to temperature and humidity, it has rarely been grown artificially until now. Using an IoT-based smart farm system, we are now able to reliably cultivate and ship cordyceps.”

Cordyceps produced via the smart farm system has been recognized for its potent medicinal qualities and as a safe food source, with exports to China having already begun. With the success of its cordyceps farm, Autofactory now aims to develop other systems that can be applied to fisheries and factory farms. Also, it is currently engaged in negotiations for the export of smart farm systems to China, Japan, and Vietnam that have been customized to suit the agricultural environments in those countries.

Lee said, “I believe that the more connected the world is, the more value can be created. Our vision is to create services that can be connected with most forms of technology and areas of everyday life.” Autofactory receives support from the Gyeonggi Center for Creative Economy & Innovation in carrying out its overseas marketing activities.