South Korea, the United States and Japan agreed Monday to work closely together in responding to the recent killing of the half brother of North Korean leader Kim Jong-un, an official said.

Kim Hong-kyun, South Korea's chief envoy on North Korea issues, reached the agreement when he held talks in Washington with his US and Japanese counterparts, Joseph Yun and Kenji Kanasugi, amid mounting evidence that Pyongyang was behind the death of Kim Jong-nam, the leader's estranged brother. 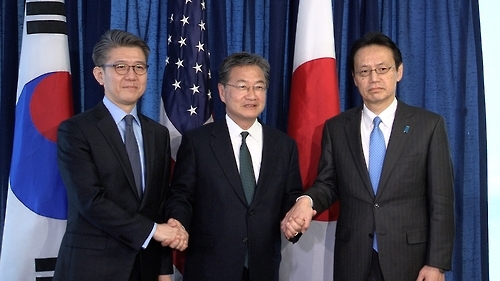 Kim Hong-kyun (L), South Korea's chief envoy on North Korea issues, poses for a photo with his US and Japanese counterparts, Joseph Yun (C) and Kenji Kanasugi (R), during a meeting in Washington on Feb. 27, 2017. (Yonhap)
"The representatives of the three countries exchanged views on the killing of Kim Jong-nam in Malaysia and agreed to closely coordinate a response while monitoring the situation," Kim told reporters at a briefing.

The Feb. 13 killing happened at Kuala Lumpur International Airport, and Malaysian police have determined that the lethal nerve agent VX was used. VX is a chemical agent listed as a weapon of mass destruction by the United Nations and its use is banned under the Chemical Weapons Convention.

Eight North Koreans have been named as suspects, but the North has denied its involvement.

"Our side emphasized that Kim Jong-nam's killing is a serious violation of international norms in that a banned chemical weapon was used, and the international community respond strongly to this in light of the fact that it is an inhumane and anti-human rights crime," Kim said.

It was unclear how the US and Japanese officials characterized the killing.

Monday's meeting was a focus of attention as it could reveal for the first time how the US views the death of Kim Jong-nam.

Despite the mounting evidence pointing to North Korea's responsibility, the US has refrained from any reaction to the killing.

The missile adds to the already massive arsenal of nuclear weapons and missiles the communist nation boasts after conducting five nuclear tests and a number of ballistic missile launches under its ultimate goal of developing a nuclear missile capable of striking the US.

Kim said that the three countries agreed to warn North Korea strongly against additional provocations, sharing the view that the missile launch could be a "precursor" to the North firing an intercontinental ballistic missile that leader Kim threatened to test-fire.

The sides also discussed ways to ensure full implementation of sanctions on the North, Kim said.

The latest missile launch, coupled with the killing, has raised fresh calls in the US Congress for putting the communist regime back on the list of states sponsoring terrorism. The State Department has reportedly launched a review of the possibility.

Monday's meeting marks the first such talks since the Trump administration came into office. The three countries have often held such trilateral strategy sessions to fine-tune and coordinate their North Korean policies. The last such meeting took place in December. (Yonhap)