Five months after introducing its digital assistant, Google is sharing the feature with Android partners, hoping the service can boost its odds to win customers from Apple Inc.'s iPhone.

Alphabet Inc.'s Google is making its intelligent assistant -- a service that answers queries, plays music and completes tasks -- available for smartphones using the two newest versions of its Android software. It's showcasing the service with a closer partnership with LG Electronics Co. announced Sunday at the Mobile World Congress in Barcelona, where LG and a slew of hardware manufacturers aim to make a splash ahead of the iPhone's 10th anniversary later this year. 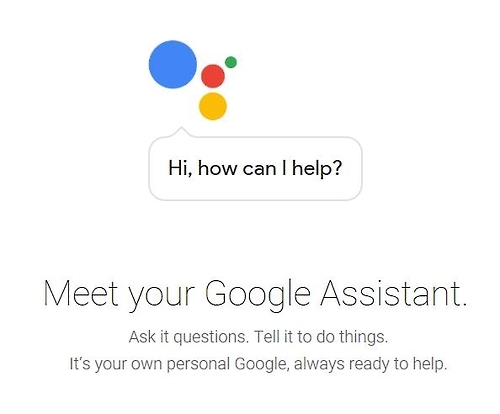 This photo captured from the website of Google Assistant shows the AI-assisted voice butler service. (Yonhap)
Until now, Google's Pixel smartphone, introduced in October, has been the only handset with the company's automated assistant. Gummi Hafsteinsson, the product lead for the assistant, said exclusivity was required to refine the system, a key priority at the company. "It was a new product and we wanted to make sure we took the baby steps required," he said.

By adding the assistant to Android devices, which researcher IDC estimates make up 85 percent of all global smartphones, Google is moving closer to its goal of expanding the use of the feature. The virtual assistant will reach about one-third of Android phones, including the new devices rolled out Sunday by LG and others, that use Google's latest software, according to the company.

"We obviously would want to provide it to every device in the world," Hafsteinsson added.

Android phones that run Google's Play store services will now have access to the assistant, which can be summoned through a voice command ("OK, Google") or the phone's home screen. But Google is working more intimately with LG.

On Sunday in Barcelona, LG unveiled its latest phone, the G6, with the Google Assistant. It has super slim bezels on either side of the 5.7-inch display, putting a larger screen than that of the iPhone 7 Plus into a smaller package. The phone from the South Korean company has a dual-lens camera system and a high-resolution screen packed into a thin metal body. Those features put it on par with the latest pricier smartphones -- a competitive field that includes rising Chinese players, such as Huawei Technologies Co., and now Google.

LG worked closely with the Pixel maker to ensure that the South Korean company's own services, like its calendar and alarm clock apps, work easily with Google's assistant. Some of its Android peers, such as Samsung, are building their own voice-assistant services. Bloomberg News reported that Huawei is doing the same.

"We still keep a very close relationship between LG and Google, even though Google is building their own phone," said Ian Hwang, a product manager at LG. He called Google a "frenemy," but said the search giant cannot rely on its own Pixel phone as the world's only advanced Android hardware.

LG had 3.7 percent of the global smartphone market as of the end of the 2016 third quarter, according to data compiled by Bloomberg.

The phones are going on sale ahead of an expected significant half of the year for the smartphone industry. Samsung Electronics Co. is prepping the latest release of its flagship Galaxy S line. Apple is getting ready for a new iPhone with a crisper OLED display and an embedded Home button with a glass back. Andy Rubin, the creator of Google's Android software, is working on his own smartphone hardware. With each device, the creators are focusing increasingly on artificial intelligence software to lock consumers into the companies' systems. (Bloomberg)