South Korea spurned Japan's diplomatic protest on Wednesday over a video clip which Seoul uploaded to promote the name East Sea for the body of water between the two neighboring countries.

South Korea's foreign ministry uploaded the 5-minute clip on its Web site on Monday, in which Seoul promoted the East Sea as an official name that should be used alongside the Sea of Japan designation. 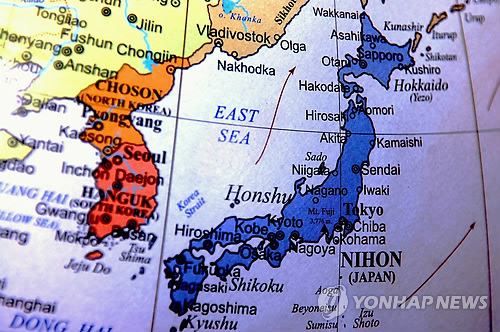 (Yonhap)
Currently, the name Sea of Japan is more widely recognized around the world, but a growing number of maps use the term East Sea in conjunction with the Japanese name, according to experts.

Japan immediately protested the video in a strong tone, the country's government spokesman said earlier in the day.

"(South Korea) rejected the protest as unacceptable given the international and historic validity of the term East Sea," the Ministry of Foreign Affairs said in a press release.

The foreign ministry referred to international standards laid by the United Nations and International Hydrographic Organization as the basis for its call to use both names officially.

"The UN and IHO-adopted international standards allow the juxtaposition of each side's name when countries fail to reach an agreement on the naming of a landmark they share," the foreign ministry said.

"Having been used for more than 2,000 years, East Sea is the oldest name for this sea and Japan's argument that Sea of Japan is the only internationally established name is untrue given that many local and foreign map creators, publishers and textbook writers are increasingly using both names," it said.

The South Korea government will continue its efforts to promote a wider use of the name East Sea, the ministry said. (Yonhap)