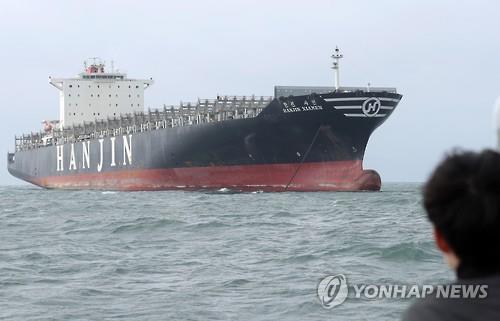 (Yonhap)
The state-run Korea Development Bank, other state-run debt guarantee agencies, and retail investors are feared to shoulder up to 1.2 trillion won worth of losses, they said.

"The exact amount of losses can be calculated after a recovery rate is fixed," an industry source said. "But it is highly likely for them to suffer huge losses."

Hanjin Shipping was pronounced dead by a Seoul court Friday, ending its 40-year run. Earlier this month, the court said that it decided to end the debt rehabilitation scheme for the shipping line as most of Hanjin's key assets had been sold.

Hanjin Shipping, previously the nation's largest shipping firm and the world's seventh largest, was put under court receivership in September last year, as its creditors, led by the KDB, rejected its self-rescue plan.

Hanjin Shipping and local shippers have been under financial strain due to falling freight rates stemming from an oversupply of ships and a protracted slump in the global economy. (Yonhap)