Malaysian police said Saturday they have arrested a North Korean man in connection with the recent killing of the North Korean leader's half brother amid a diplomatic feud between Malaysia and North Korea over an autopsy.

Ri Jong-chol, 46, was arrested at 9:50 p.m. Friday night in Selangor state, the police said in a statement. He is the fourth suspect arrested in connection to the murder of Kim Jong-nam on Monday. 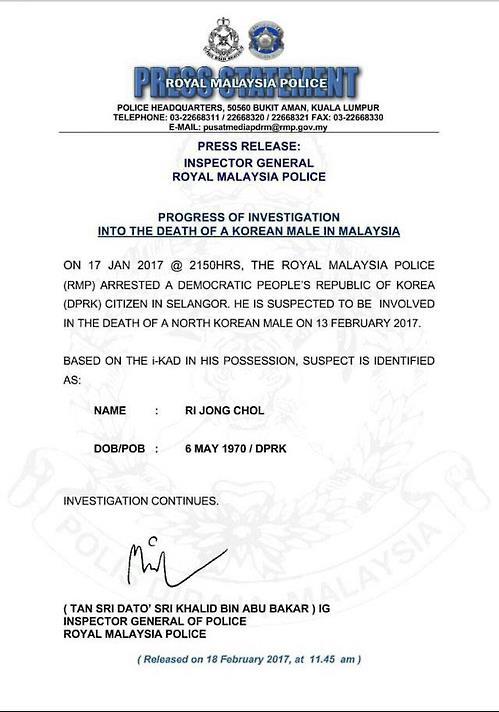 Shown here is a press release from the Malaysian police on the arrest of Ri Jong-chol, a North Korean suspect in the muder case of Kim Jong-nam. (Yonhap)
Ri was in possession of an "i-Kad" card, a identification card issued by the Malaysian government to registered foreign workers.

Oriental Daily News, a Malaysian-based Chinese-language daily, reported that Ri has a wife in her 40s, a 17-year-old son and a 10-year-old daughter, citing tenants in his apartment. The neighbors said he was an average father.

Malaysian authorities have already arrested three suspects, including two Asian women, in connection with the death of Kim Jong-nam.

Kim Jong-nam, the eldest son of late North Korean leader Kim Jong-il, who has a different mother from the current leader, was killed in an airport in Malaysia on Monday after being attacked by two women who are suspected to have used some sort of poison.

It has yet to be confirmed whether North Korea was behind the latest killing, but Seoul's spy agency said Wednesday that Kim Jong-un issued a "standing order" to murder his sibling after he assumed power in late 2011.

Meanwhile, Associated Press reported that a second autopsy on Kim Jong-nam started Friday night because the results of the first one were inconclusive, quoting an unidentified Malaysian official.

A diplomatic row between North Korean and Malaysia over Kim Jong-nam's remains was also brewing. Kang Chol, North Korea's ambassador to Malaysia, demanded that Malaysia immediately hand over the body, accusing Malaysia of trying to deceive the North while colluding with what he calls "hostile forces" trying to do Pyongyang harm.

"We will categorically reject the result of the postmortem conducted unilaterally excluding our attendance," the ambassador said while reading a statement in front of the mortuary of Hospital Kuala Lumpur.

"While in Malaysia, everyone has to obey and follow our rules and regulations ... that includes North Korea," Khalid was quoted as saying, adding that the police must obtain a DNA sample from the Kim Jong-nam family in order to conclude the investigation. (Yonhap)