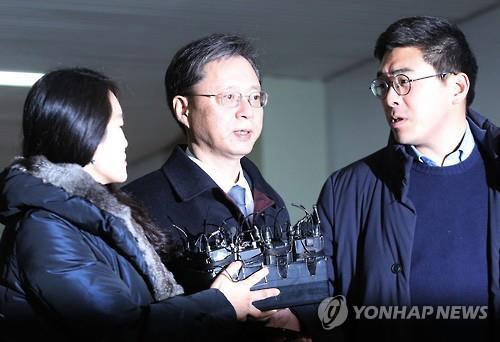 Woo Byung-woo (C), former senior presidential secretary for civil affairs, speaks to reporters after arriving at the special prosecutors' office in southern Seoul on Feb. 18, 2017. Woo is accused of abuse of authority and embezzlement. (Yonhap)
He was summoned by the special prosecutors on allegations of aiding and abetting the wide-ranging corruption of Choi Soon-sil, a longtime friend to the president.

Woo is under investigation on charges of dereliction of duty over suspicions he overlooked Choi's alleged irregularities while serving the president by flexing his authority to demote or fire officials who attempted to block Choi's activities.

Choi's wide-ranging allegations, including her access to classified material and meddling in state policy, has led to the impeachment of Park by parliament in December. The impeachment trial is taking place at the Constitutional Court.

Woo is also under suspicion of spearheading the ousting of former special presidential inspector Lee Seok-soo, who resigned after looking into Choi's alleged unwarranted involvement in state affairs.

Investigators are also expected to grill Woo on allegedly embezzling funds from a real estate company run by his family. He is also purported to have peddled influence to help his son secure an easy job during his mandatory military service. (Yonhap)