“Singapore Airlines has a wide variety of customer base. Also, the Korean cuisine is increasing in popularity, so we decided to introduce hansik (traditional Korean food),” said Betty Wong, a divisional vice president of customer experience at Singapore Airlines, during a media event held at Yim’s restaurant in central Seoul.

According to Wong, taste was a top priority for both the airline and chef Yim, who put in effort finalizing details of the dishes until the last moment.

The two parties shared about the challenges in capturing the integrity of Yim’s dishes.

They said the dry air conditions and limited cooking equipment on board affects the palette of passengers and the taste of the food.

“Chefs have to work with a limited number of cooking equipment in the air, so the process of putting together a good meal was quite a challenge,” said Yim.

“I tried to put together traditional Korean dishes with enhanced food texture.”

The appearance of the hansik dishes was also a key factor that the airline and Yim focused on.

Bibimbap, a traditional Korean dish of mixed rice and vegetables, will be served to economy class passengers.

Singapore Airlines previously did not have a complete meal of Korean food for customers traveling in economy class. 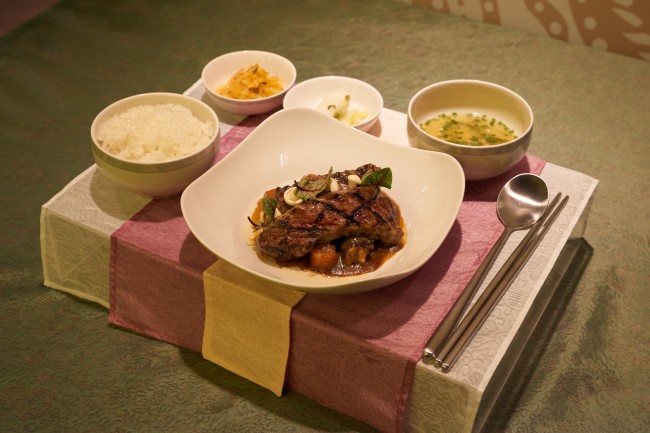 A full course meal is also offered to business class customers, including braised beef short ribs with vegetables and steamed rice as one of the three main dishes of their choice.

Singapore Airlines will offer Jung's dishes for its in-flight meals for at least seven months from March.