South Korean Foreign Minister Yun Byung-se and US Secretary of State Rex Tillerson agreed Thursday to put together joint strategies to deal with North Korea based on an understanding that the communist nation has reached the final stage of nuclear armament, officials said.

The two top diplomats reached the agreement when they held one-on-one talks in the German city of Bonn on the sidelines of the Group of 20 foreign ministers' gathering, officials said. It was the first foreign ministers' meeting between the two countries since the inauguration of US President Donald Trump. 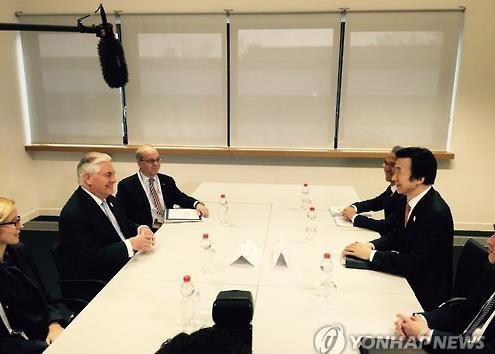 South Korean Foreign Minister Yun Byung-se (R) and U.S. Secretary of State Rex Tillerson hold talks on the sidelines of the Group of 20 foreign ministers' gathering in Bonn on Feb. 16. (Yonhap)
During the 25 minutes of talks, the two sides agreed to draw up joint strategies to deal with the North under a perception that Pyongyang's nuclear program poses fundamentally different threats than in the past. They also shared the view that the North's nuclear armament has reached the final stage, the officials said.

Yun and Tillerson also shared an understanding that the North's latest missile test is worrisome in that it diversifies delivery means of nuclear weapons, officials said.

The two sides also discussed the recent assassination of the half brother of North Korean leader Kim Jong-un.

"The two ministers characterized it as a very unusual incident," a Foreign Ministry official said. "They said they're weightily taking the issue's seriousness and they will work closely on the international community's response."

Tillerson reaffirmed the US commitment to defend the South through every possible means, including the extended deterrence, officials said.

The top American diplomat also said there is no "space" between the two countries.

After the talks, Yun said that the two sides agreed to hold follow-up discussions to flesh out joint strategies on the North. (Yonhap)