Chatbots are AI-powered computer programs that can mimic human conversations and react to spoken or written prompts to deliver services.

Global IT firms like Facebook and Google have already introduced chatbots for businesses on its mobile messengers which can handle tasks such as restaurant reservations, online purchase as well as various forms of customer support. 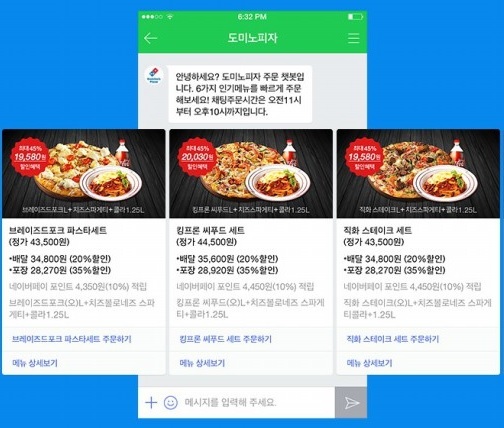 Naver`s chatbot for Domino`s Pizza (Naver)
Following the trend, Naver, the operator of Korea’s biggest portal website, and Kakao, which runs the country’s dominant mobile messenger KakaoTalk, are adopting chatbots to their services to let users make online transactions via their platforms.

This week, Naver released a new chatbot ordering service in partnership with Domino’s Pizza. Users who search for “Domino's Pizza” on Naver can simply click the “Order via chatbot” button to place orders with the pizza franchise.

“Users no longer have to figure out the location or phone number of a nearby Domino’s outlet. They can easily place an order by clicking the “order via chatbot” button,” Naver said.

This new function was developed as part of Naver’s chatbot service platform TalkTalk, which also offers a “shopping chatbot” service that give automated responses to customer inquiries made via online shopping websites hosted by Naver.

Some 12.4 percent of the customers who were assisted by a shopping chatbot to attain more information about a given product ended up purchasing the item, according to Naver.

Naver-owned Line, the dominant mobile messenger in several Asian markets, is also seeking a future in chatbots. The firm recently opened up a new messaging API to developers and announced plans to financially compensate those who could develop new chatbots that would add value to its present user experience.

Meanwhile, Kakao is also eyeing AI-powered chatbots as a key part of its future strategy. The company recently set up a new subsidiary dedicated to AI tech development, with chatbot development as a key priority for the mobile messenger platform.

The firm is scheduled to introduce AI chatbot into its “Plus Friends” service -- corporate accounts on KakaoTalk that send out promotional messages to users who add them -- to handle product inquiries, purchases as well as payments via the messenger.