At its headquarters in Gwanghwamun in central Seoul, K bank’s some 200 employees are busy making sure all its financial transaction systems and the user interface of K bank’s smartphone app does not have any glitches, prior to the official launch of its services in early or mid-March.

“While we target our deposits to reach 500 billion won ($433 million) this year, we will offer the highest deposit rates among the existing commercial banks,” Shim Sung-hoon, CEO and president of K bank, said in an interview with The Korea Herald, at K bank’s head office in Seoul, Thursday.

“For loans, we have set our annual target at 400 billion won this year. We will focus on extending loans to those whose credit grades are underestimated by the traditional ratings system such as new graduates and women whose careers have been interrupted.” 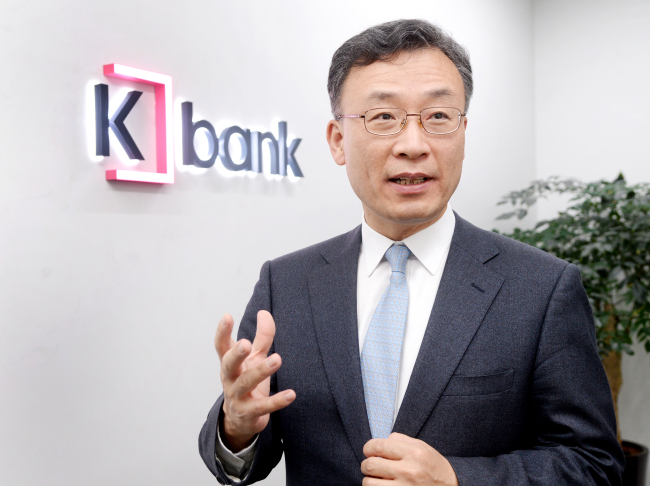 Shim Sung-hoon, CEO and president of K bank, speaks during an interview with The Korea Herald in Seoul, Thursday. (Park Hyun-koo/The Korea Herald)
The former head of the management and planning division at KT engcore, an engineering subsidiary of KT, said that K bank will be able to use the big data of telco giant KT, K bank’s largest stakeholder, to analyze smartphone users’ telecom bill payments and figure out whether they are reliable in debt repayments. If they are, the bank will offer more favorable loans to those who have to pay high interest rates at other lower-tier financial firms such as savings banks and capital firms, he said.

To compete against the upcoming internet-only Kakao Bank, K bank will take advantage of its stakeholders’ nation-wide networks such as GS Retail’s 10,500 convenience stores and KT’s 3,000 telecom outlets, according to Shim. Kakao Bank has a formidable mobile platform Kakao Talk, the household-name messenger app operated by Kakao Corp.

“Almost every convenience store GS25 has a CD/ATM machine. While such machines provide services for all bank cards, we will temporarily exempt ATM usage fees for K bank check cards until this year by teaming up with GS Retail,” Shim said.

For example, at a KT outlet, a telco salesperson could recommend making a K bank check card when a KT user subscribes to a KT telecom plan or changes his or her mobile service provider, and if the user agrees, the salesperson could offer discounts for telecom products, he said. 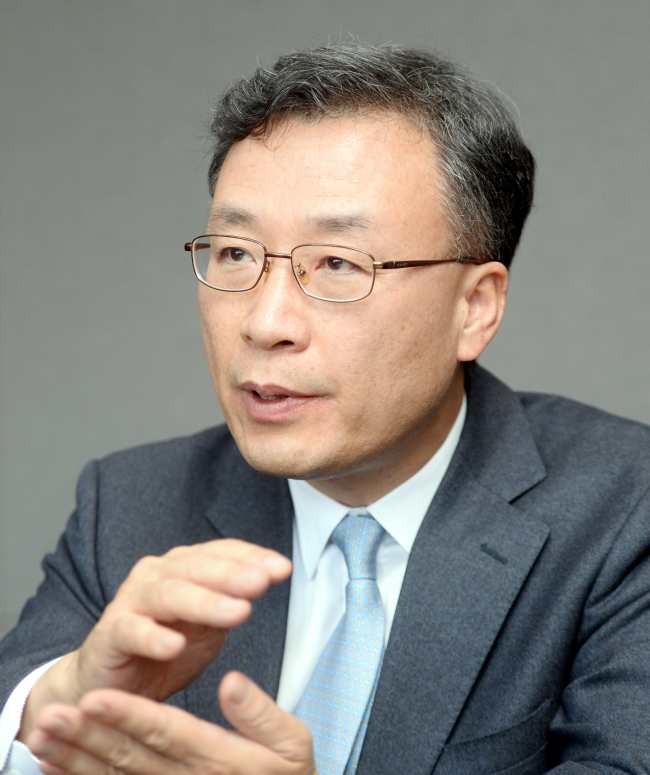 Shim Sung-hoon, CEO and president of K bank, speaks during an interview with The Korea Herald in Seoul, Thursday. (Park Hyun-koo/The Korea Herald)
The launch of K bank was originally scheduled for January, but the company delayed the launch to March as the user interface of various Android versions of K bank’s smartphone app required some fine-tuning.

It will take only about 10 minutes for a smartphone user to open a K bank account, Shim said.

“With a single app, we will offer simple retail banking in the first half of the year -- deposits, loans and check cards. Then, we will expand into bancassurance and other (services) in early next year,” Shim said.

The biggest challenge in expanding its business is the nation’s strict regulations that prevent a conglomerate from owning a more than 10 percent stake in a bank. If voting rights are involved, the maximum is 4 percent.

KT, which has an 8 percent stake in K bank, needs a much higher cap than 10 percent to double K bank’s capital within two or three years to meet the BIS capital ratio, a global standard that gauges a bank’s core equity capital to its total risk-weighted assets, on the assumption that the bank keeps growing in terms of deposits and loans, according to Shim.

A revision bill, proposed by Rep. Kang Seok-jin of the ruling Saenuri Party, to increase the ratio to 50 percent is still pending at the National Assembly. A special bill, proposed by Rep. Jung Jae-ho of the main opposition Democratic Party of Korea, to increase the ratio to 34 percent -- under the condition that a bank is prevented from lending credit to its largest stakeholder and buying stocks of its largest stakeholder -- is also pending.

Most opposition lawmakers are refusing to pass both Kang’s and Jung’s bills, citing worries that chaebol might use banks for their private coffers.

Shim, however, said such worries are based on the wrong understanding about KT.

“KT is not run by a chaebol owner. Its stakes are owned by various shareholders including foreign investors. Among local shareholders, the National Pension Service is the largest shareholder,” Shim said. The NPS has a 10 percent stake as of Jan. 23, according to a regulatory filing.

Shim said K bank will aim to boost its assets to 15 trillion won in 10 years, saying millennials and the younger generation, who regard smartphones as necessities, will lead the rapid growth of the mobile banking sector.