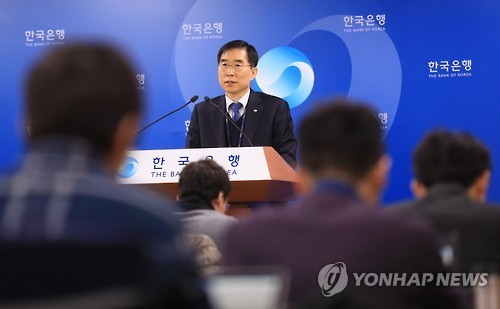 Chung Kyu-il, director general of the Economic Statistics Department at the Bank of Korea, speaks to reporters in Seoul on Feb. 3, 2017. (Yonhap)
The surplus was the second-largest since the government started to compile the data, but came as a decline in imports is greater than a decrease in exports, an official at the central bank said.

“The exports declined last year but imports fell at a greater pace,” Chung Kyu-il, director general of the Economic Statistics Department at the central bank, said on Friday.

The record deficit in the service balance last year was attributed to the first-ever deficit in transport balances and deterioration in the construction sector despite improvement in the travel balance.

The balance of transport turned into a deficit of $630 million in 2016 from a surplus of $4.63 billion a year ago, recording the first deficit in 20 years. South Korea’s transport sector suffered from restructuring amid the collapse of leading transport company Hanjin Shipping Co.

In the primary income account, which includes wages and investments, the country posted a surplus of $1.46 billion in 2016, compared with a surplus of $3.57 billion a year earlier.

With a near-record high current account surplus, concerns over a possible labeling as a currency manipulator by the US is growing.

On Wednesday, US President Donald Trump and his top economics advisor accused Germany, Japan and China of manipulating their currencies to the harm of American companies and consumers.

Trump did not mention South Korea but the country is on the “monitoring list” of currency manipulators as South Korea meets two of three criteria, including a trade surplus with the US that is more than 3 percent of that country’s gross domestic product.

In 2015, South Korea’s current account surplus was at 7.7 percent of the total GDP. The figures for 2016 have not been published but it is expected to exceed 7 percent, the level the central bank sees exceptionally high.

Finance Minister Yoo Il-ho on Thursday said that it would be possible to avoid to being named a currency manipulator if the current-account surplus is narrowed.